Come on Australia – Get up to speed with the NBN! 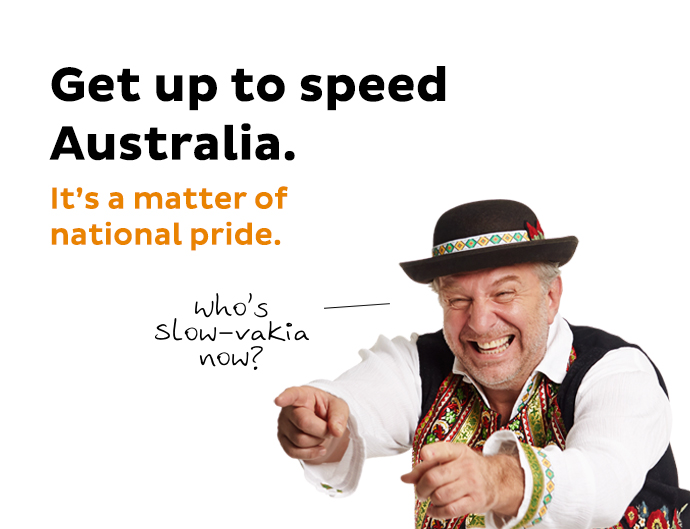 As a nation we’ve always punched above our weight on an international scale – whether it be on the sporting field or in the lab.

Despite our small population, Australia has been the birthplace of some of the world’s most advanced technologies. Things that have changed the world for the better like Wi-Fi, spray on skin, the bionic ear, the pacemaker, ultrasound and don’t forget Vegemite.

But despite these achievements, we’re still lagging behind the rest of the world in a very important area.

You might be surprised to discover that according to the Akamai State of the Internet Report Australia doesn’t rank within the top 10 countries in the world when it comes to average internet speeds. We don’t even crack the Top 40. Australia occupies the less glamorous position of 44.

So what are all those other countries are doing with their faster Internet speeds?

Home of the Smörgåsbord, ABBA and Ikea – Sweden has the 7th fastest average internet speeds in the world. It’s also the proud birthplace of Spotify, a commercial music streaming platform with over 40 million users, that has changed the way people listen to music around the world.

Of course, thanks to their internet connections, the Swedes don’t experience any buffering or lag while listening to “Waterloo” (or The Hives and Miike Snow, if you’d like a more contemporary music reference.)

In the US (ranked 10th) Netflix has revolutionised the way Americans watch TV, creating a corporate juggernaut with over 40 million customers worldwide, over 4 billion dollars in revenue and creating it’s own Emmy and Golden Globe winning content.

Which brings us to the number one spot….

The South Koreans have long been associated with advanced technology. With companies like Samsung, LG, Daewoo and Hyandai to name a few, it’s not surprising that they also have the fastest average internet speeds in the world. They also have a strong gaming culture – with those fast Internet speeds they have a considerable advantage in electronic sports (eSports), where milliseconds definitely matter!

As NBN Experts, we think Australia needs to get up to speed. We’re doing our best to provide all the information you need to know about the NBN, in a clear and simple way. In fact, we recently commissioned research into Australian’s understanding of the NBN – with some very surprising results!

And when it comes to average internet speeds just look at the facts:

Should we be taking this lying down Australia? No, it’s a matter of national pride!

What should you do?