Dive into Virtual Reality with these Devices 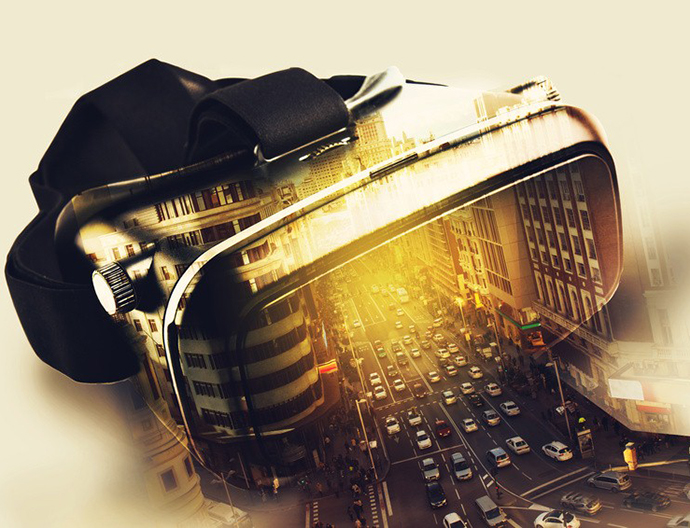 Society’s obsession with the idea of virtual reality (VR) has been made apparent through the success of science fiction films such as The Matrix and shows like Sword Art Online; the concept of being able to perfectly distort reality in a convincing way even has some scientists questioning whether or not we are currently living in a virtual world.  Whether you love the idea or fear it, virtual reality devices are popping up on the market, ready to use, with 2016 said to be the year for VR.

Virtual reality is mostly known for its application in video games, but it’s also being used with other media: TV, movies and YouTube are all entering the VR foray. These media are often thought of as a form of escapism, so it makes sense that the more realistic the VR, the better the experience. But the more advanced the technology is, the bigger the price tag attached. Thankfully, there are a range of devices out there at different levels of affordability, so people on any budget can get a taste of virtual reality.

Whether you’re looking for a powerful, high-end VR device to transport you to another world or you just want to try the VR experience without the hefty cost, there is a device out there for you. We take a look at some of the options available below. Starting at the cheaper end of the spectrum, there’s Google Cardboard. Google Cardboard isn’t one specific device, it’s more the concept of having a “viewer” made out of inexpensive materials (such as cardboard) then inserting your smartphone into it and downloading one or more Google Cardboard compatible apps to have a VR experience. There are multiple viewers available starting from just $14.99 and ranging from ones that require a small amount of assembly to ones that come pre-made.

Okay, so it might not seem as affordable when you factor in the smartphone you need to use it, but if you already have a smartphone, it’s an inexpensive option for VR. The design is quite ingenious considering the crude materials used, and if you don’t want to buy a viewer from the site, there are plans available to show you how to build your own Google Cardboard from materials such as cardboard, magnets and Velcro strips.

The quality of the display will depend largely on the smartphone you’re using with it. The visuals will never be as clean or advanced as the higher-end devices, but if you just want to see what all the fuss is about with VR, it’s a working option that requires very little investment.

Moving up in the price range, we find the Samsung Gear VR headset. If you can’t afford the Oculus Rift, but still want an advanced VR headset, you’ll be pleased to hear that the Samsung Gear VR was co-developed with Oculus, so you know the technology is sound. Like the Google Cardboard, this device is able to wear the lower price tag of $158.99 because it relies on your smartphone to do some of the work.

The padded headset acts as a VR viewer for your Samsung smartphone and the internal hardware such as an accelerometer, proximity-based sensors and a gyroscope help pull together an enhanced performance with reduced latency. The powerful technology creates a more immersive experience than Google Cardboard and is said to be surprisingly close to the experience of an Oculus Rift, despite the fact it is powered by a smartphone rather than a high-end gaming PC.

The major limitation with this headset is the number of compatible phones you can use with it. Only a handful of Samsung smartphones can be used with the device, which isn’t great news for iPhone, LG, HTC or any other smartphone user. But all is not lost, there are a couple of similar devices on the market such as the Zeiss VR One and Homido Virtual Reality Headset, which have a similar design, but are more universally compatible with a wider range of smartphones. The Oculus Rift is usually the first device that comes to mind when people think of VR – it was the device that really helped to kick-start the commercial VR headset movement. This VR headset employs some of the most cutting edge technology to deliver a completely immersive experience in a 3D world. The Oculus Company funded the design with a Kickstarter campaign in 2012, which successfully raised $2.5 million USD. The company has since been purchased by Facebook, who are selling the device for $599.00 USD per unit.

I had the pleasure of being one of the first to try the Oculus when they were offering demos at PAX Australia. After waiting in line for over an hour I was giddy with excitement as I finally had the headset placed over my eyes and headphones over my ears. Suddenly I was in a Mario-esque world surrounded by tall cliffs and waterfalls (it turned out to be the demo of Lucky’s Tale – the game that comes with a pre-ordered Oculus Rift). I turned my head all around, looked up and down and it was just videogame all around me – it was a childhood dream come true. Sadly, my excitement was short lived as soon after the headset was removed, I became extremely motion sick and spent the rest of the convention with my head against a plastic table trying to rest it off.

Oculus has apparently reduced the issue of motion sickness with OLED screens, increased frame rate and reduced latency. I hope this is true because I would love to give it another go in the future. I can’t argue that the experience was highly immersive and it was everything I had hoped VR would be. I just hope my next experience doesn’t leave my head spinning!

You can’t talk about the top range of VR devices without mentioning the HTC Vive. It’s certainly one of the most expensive options on the market at $899.00 USD to pre-order, but with good reason. HTC Vive has been described as one of the most immersive virtual reality experiences you can have. While the Oculus focuses more on a sit-down VR experience, HTC Vive sets itself apart by encouraging the user to move around, making the experience feel more “real”. The wireless controllers for HTC Vive add an extra layer of interaction by letting you “feel” objects within the game as you use them.

Though this device is extremely powerful and has a seamless transition between virtual reality and reality, one of the drawbacks is the current lack of content to enjoy it with. Of the people who have been fortunate enough to experience HTC Vive, a few have expressed disappointment that it does not have a truly engrossing game among the ranks of the Zeldas and Marios us gamers have become accustomed to.

Considering most commercial users can only pre-order at this stage, I hope this issue will be alleviated after the devices takes off. I am looking forward to enjoying games with movie-quality plots and loveable characters in a full virtual world. I imagine games as epic as my old Super Nintendo favourites such as Breath of Fire 2 and Secret of Mana done as VR and I can’t help but feel excited. Even if it takes me 10 years to save for, and VR is a thing of the past by the time I can afford it, HTC Vive is definitely the device I want!

Which VR device are you hanging out for? Let us know in the comments below.