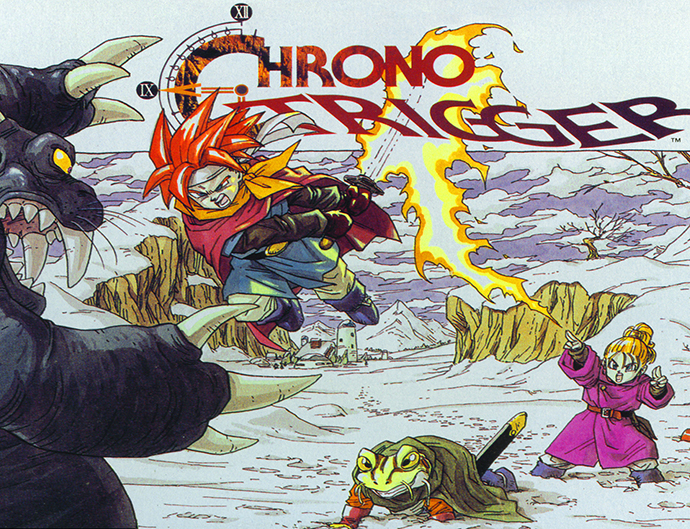 Title: Chrono Trigger
Platform: Super Nintendo (Now available as an Android app!)
Developer: Square Enix
Get it from: Google Play $12.99 USD
Suitable for: Everyone. In fact, I’d go so far as to say that every game-lover should play this game at least once in their lifetime.

Only time will see how it all ends

There are so many great games throughout history, but few as critically acclaimed as Chrono Trigger, with many touting it as one of the best games ever made. A quintessential Japanese Role Playing Game (JRPG), this time travelling adventure follows protagonist Chrono, who, after bumping into a mysterious girl at a festival, ends up being thrown through time and discovering the horrible secret about how the world will eventually end. He then forms a team of colourful characters from different times throughout history to try and change the world’s trajectory and create hope for humanity.

One of the great things about Chrono Trigger is it lets the player choose the difficulty and length of their adventure through various gameplay elements. You can choose from the start of the game whether you want the enemies to attack you at random, or have to wait for you choose your attacks before they get a chance. The way enemies are positioned on the map is such that you can choose to fight them or bypass them entirely (with some exceptions) and you can even choose to fight the final boss earlier, or further explore each of the characters with side quests and build up your strength before going in.  There are also any number of hidden treasures and 13 unique endings! This makes it entertaining for the more hardcore gamers as well as newbies or little kids. The soundtrack! Just have a little taste of some epic “Frog’s Theme” and maybe you’ll understand what I mean. I had this baby as my ringtone for almost 2 years. And if you like that, why not listen to 2 and a half glorious hours of this amazing soundtrack and allow yourself to be transported to another world. I honestly believe it is the best video game music in the history of gaming. They captured the magic of the fantasy world they created so brilliantly, every character’s theme song is this gorgeous reflection of who they are and helps flesh them out from pixel people to some of your closest friends (I am still deeply invested in the Crono/Marle relationship).

Speaking of the characters, they are some of the best developed and most loveable characters I’ve ever come across in a game. They all have unique, memorable personalities and quirks and intricate back stories that make them feel so real – perhaps a little too real at times, constantly delivering massive doses of “the feels”. After 21 years, spoilers are probably fair game but I’ll still aim to be vague when mentioning some of my favourite moments for getting “the feels”, including: Lucca getting the chance to reverse an accident that occurred during her childhood, the relationship between Magus and Schala and Magus’s pledge at the ending, the embrace between Marle and Crono on Death Peak (Yes, a similar scene can occur with Lucca if you omit Marle from the party, but I like it better with Marle and Crono) and of course, the line in the game that rips out my heart every time I play, Marle uttering to her father “I used to call you… Daddy?”
… I’m not crying! You are! Not a con for me personally, but I know some people have qualms with turn-based fighting. I think it makes sense in a game where you can either attack individually or do combination magic attacks, to take the time to choose your moves in a turn-based style format. I’m just including this in the “Cons” section because I know a lot of turn-based haters and I’m struggling to come up with anything I don’t like about this game – besides the fact there isn’t more of it. It may be a struggle to go back to 16-bit graphics from 1995 if you’re a modern gamer, but if you love fantasy JRPGs, I must insist you give this game a whirl. It is easily one of the gaming “classics”, and it’s just so colourful, fun and engaging. The plot twists and turns make sure there’s never a boring moment and they managed to tackle the theme of time travel (which is so often rife with tricky paradoxes) flawlessly. It’s not often a game will make me laugh and cry and feel everything in between, but that’s why Chrono Trigger has a special place in my heart. Did you play this game on your SNES back in the day? Let us know in the comments below.