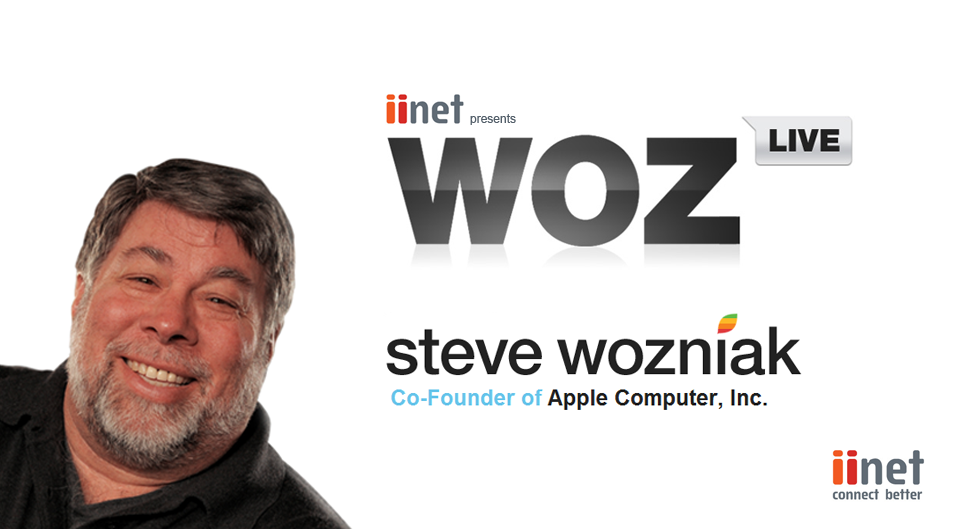 iiNet is very proud to present WOZ Live – the Apple Story, a series of half day seminars taking place in Perth, Sydney and Melbourne this May.

In a world first, Steve Wozniak, co-founder of Apple, will offer insight into the brand that has shaped our lives and changed the technology industry beyond recognition.

In 1976, Steve Wozniak and Steve Jobs joined forces to found Apple Computer Inc. for the launch of Wozniak’s Apple I personal computer. The newly founded company followed this landmark event in 1977 with the launch of Apple II, boasting easy to use features such as colour graphics, a keyboard and floppy disk drive which set Apple apart from competitors and lay the foundations for Apple’s future success. Steve’s design work has earned him numerous accolades and awards, as well as sealing his place in Silicon Valley history.

Since leaving Apple in 1985, Steve has been known for his business and philanthropic ventures. Education is a cause dear to his heart and he has invested both time and resources to bring improved technology to the classroom to encourage hands-on learning and greater creativity.

He is currently a member of the board of directors for Jacent, a developer of cost-effective telephony solutions, and Danger Inc., the developer of an end-to-end wireless internet platform and is a proud world number one Tetris Champion.

Steve’s presentation for Woz Live will reflect on the incredible legacy of CEO Steve Jobs and the work they accomplished together, reflecting on more than 30 years of Apple heritage which saw a change in the way in which people interact with one another through the devices we have come to rely on for business and personal use.

He will offer business leaders, entrepreneurs and technology industry experts an account of the business insights he and Steve Jobs learned as the company evolved from its humble beginnings in Steve Jobs’ garage in California back in 1976 to the world famous brand it has become.

A similar path to success

Of course, all the best brands start life in a garage, as evidenced by iiNet’s phenomenal journey from a start-up based out of CEO, Michael Malone’s garage in 1993 to our current position as Australia’s second largest ISP.

The similarities between Apple and iiNet don’t end with our origins. Apple has a reputation for disruptive innovation in a market dominated by slow-moving, dominant players. The same can be said of iiNet’s approach as we continue to deliver the best possible Internet experience, awesome customer service and our industry changing approach, as evidenced in our fight against online censorship and the the recent iiTrial victory.

While iiNet can’t claim to have Apple’s world dominance, we do have a few years to go. Apple is a good decade older than iiNet after all!

iiNet have arranged a special deal for our customers at the reduced rate of $895 per person for the half-day seminar.

Anthony is the Communications Manager at iiNet, he loves his two dogs, Caesar and Storm, even though some people disparagingly compare them to rats.