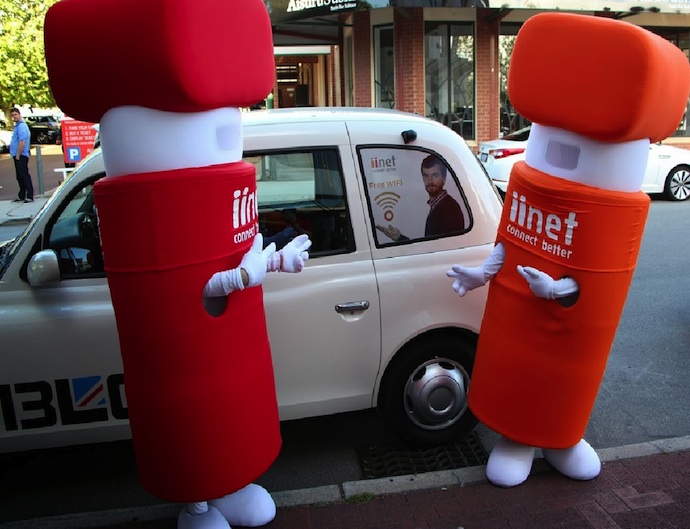 Along with the London Underground and Big Red Bus, the London taxi cab is one of the most iconic symbols of English transportation. Whether you’ve seen them in person or spotted them in your favourite Richard Curtis movie, they’re instantly recognisable.

Recently the West Australian Government announced an Australian-first: London cabs will be introduced to the streets of Perth as part of a four-year trial – with technology upgrades proudly supported by iiNet.

We’re proud to introduce the iiNet London Taxi Wi-Fi Network. We’ll be installing an internet hotspot into each taxi. This means that any patron riding in a London taxi can experience a taxi ride upgraded – and surf the net for free!

So whether you’d like to check flight details as you head towards the airport, find the hippest spots on a night out with friends or just post a selfie from the inside of a London taxi – now you can!

Even better, wherever it’s available, the hotspot will access the 4G network.

For anyone who’s been lucky enough to ride in one before, London cabs are roomier than your average taxi, and can carry up to five passengers. They provide easier access for people who face mobilitity challenges as well as families with prams. They also come with the added benefit of a security partition that separates the driver compartment from the passenger cabin.

As well as getting a technology upgrade, the new down-under versions have been modified to suit the local climate. Perth patrons will be pleased to hear that the cabs will be fitted with air condititioning and, although London cabs are traditionally black, the local version will be white to make them cooler inside and more comfortable during our hot summers.

But enough about the weather, tell me more about that free Wi-Fi!

How do I connect to the LondonTaxi network?

Connecting to the network is easy. Just follow these steps (which will also be available inside each taxi):

1. Make sure your device (phone, tablet, laptop) has Wi-Fi turned on. Depending on which device or operating system you’re using, these settings will be housed in different locations. If you’re using an Apple device (like an iPhone or iPad), simply head to ‘Settings’, then ‘Wi-Fi’. For Android users, you should also go to ‘Settings’, but then select ‘Wireless and Networks’.

2. Your device will then automatically scan for available networks.

3. A network called ‘iiNetLondonTaxi’ should appear. Select it and you’ll now be connected.

Depending on the popularity of the service, the concept of free Wi-Fi in London taxis may be extended to other states.

If you happen to spot one, why not snap a pic and post to social media using the hashtag #iiNetLondonTaxi