The story behind the iiNet #kittycam: Oh hai! I upgraded ur camz 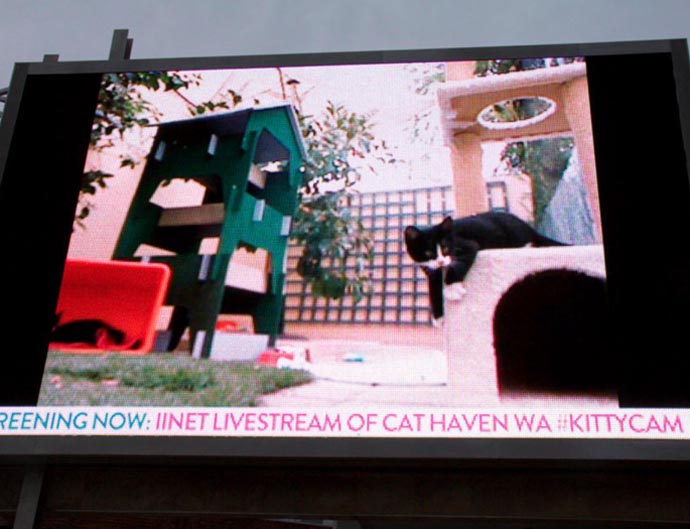 When my colleague Nick and I visited the Cat Haven last week to install a webcam, we meant it to be nothing more than a fun little project to keep ourselves and our workmates entertained. It was part of FedEx Day, where we had to start a new project from scratch and deliver it within 24 hours.

To be honest, I was dreading FedEx Day. Until a few days before, I had no idea what to do. When I finally came up with ‘some webcam idea’, it was clearly the most frivolous on the roster. But hey, I love cats, the internet loves cats – and at the very least, I’d learn how to make Internet videos.

That morning at Cat Haven

We arrived at the Haven with a bag of borrowed equipment. Lucky for us, the wireless was great, there was power nearby, and the Haven are on iiNet broadband meaning they could send the video over the iiNet Freezone without burning their quota.

We knew this idea was full of win, but only in a tongue-in-cheek way. None of us expected it to get so much attention… it turned out we were in for a surprise.

An hour after we announced kittycam on Twitter we hit 1,000 views. An hour after that, we hit 2000 and broke the Freezone’s viewer record with over 200 people watching at the same time. #kittycam was retweeted by a couple of high-profile Aussie twelebrities and rapidly trended in both Perth and Sydney.

Cat-lovers kept kittycam open in their web browsers overnight, ready for the morning, and #kittycam continued to trend on Twitter the next day. We found mentions in Gizmodo, Daily Telegraph and Sydney Morning Herald, and even heard about a short segment on the 4:30 news.

My Twitter feed for #kittycam is still going crazy, one week later.  The video went offline last Sunday so the Freezone guys could upgrade the hardware, and Nick and I have since been back with better equipment and more powerful camera. Kittycam is now back online and in high-def widescreen.

By far our best moment was getting to see the first kitten adoption live on video. Later, we learned that both adoptions and donations had gone up over the weekend. This says to us that underneath the squees, awws and retweets, iiNet and the Cat Haven were onto something genuinely useful that could potentially save some furry little lives.

It seems like many people and cats have gotten something out of our tiny project, so suffice to say we’re feline pretty good.

To answer the tech questions we’ve been getting: