Virtual Reality vs. Augmented Reality: What does it all mean? 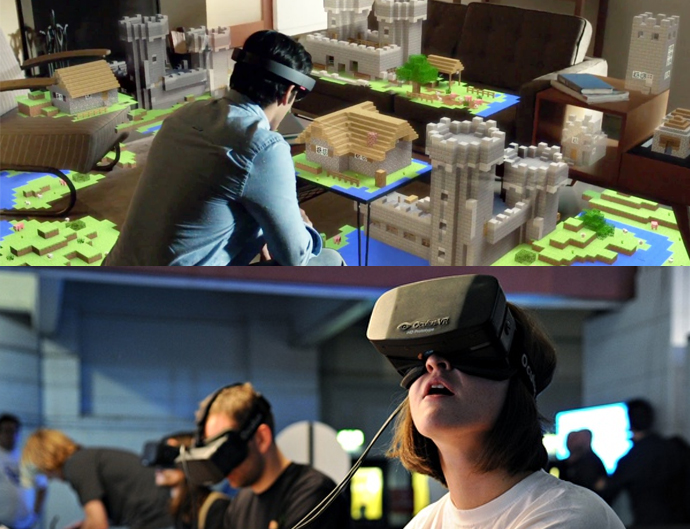 As technology slowly catches up to the future that science-fiction writers have always dreamed of, we’re finally starting to break new ground in the field of “putting on wacky goggles and being transported to a magical wonderland”.

Global tech giants from Microsoft to Google and even Facebook are pouring money into both virtual reality (VR) and augmented reality (AR), convinced that VR and AR will be the next big frontier of everything from education, to gaming, to the way we communicate.

Today, we’re going to take a (very brief!) overview of the worlds of VR and AR, explain the differences between the two, and look at how and when you’ll be experiencing these incredible new pieces of technology. VR is widely considered the next great innovation in technology, and the last few years have seen an explosion in attention and funding to VR companies and their products. In each VR headset, two small but high-resolution panels (one for each eye) deliver left-and-right images that merge together perfectly to provide you with a fully immersive virtual reality. The units also track your head movement, allowing you to look naturally around the environment simply by turning your head.

One of the leading VR contenders is the Oculus Rift, whose VR technology was originally kick started into life by enthusiastic members of the public, before being snapped up by Facebook for an astonishing amount of money. The Oculus Rift is designed for gaming, and it’ll be launching to the public in early 2016 for PC gamers running Windows (with an eye for other platforms eventually). Xbox One owners will be able to stream their games from their console to Windows 10 if they want to play in VR.

Sony are working on their own VR headset too. It’s called Project Morpheus, and it’s exclusive to the PlayStation 4 and the handheld PlayStation Vita. Owners of these two consoles can look forward to it becoming available in the first half of 2016 (Sony has yet to announce a final date).

There are more options on the VR market as well, including an Open Source VR project by gaming peripheral manufacturer Razer, a partnership between Valve Software and HTC called Vive, and a Swedish company producing something called StarVR which they claim has “twice the field of view” of Oculus.

Unlike virtual reality, augmented reality doesn’t transport you to another world: it overlays your existing world with new information and objects that only you can see. The wording is subtle but the difference is huge and it’s arguably even more sci-fi than VR: with data and images streaming into your world that you can reach out and manipulate with your fingers.

The leading contender in the field of AR is Microsoft, who recently floored audiences at E3 2015 with this incredible real-time demonstration.

As you can see in the video, Microsoft’s HoloLens technology allows you to turn your coffee table into an immersive Minecraft experience that you can reach out and touch, while other people walk around you oblivious to your little world (for more on HoloLens, watch this video as well). Google recently made an attempt to break into the world of AR with Google Glass, but they have shelved development on Glass for now. An exploratory program of sending it out into the wild was met with mixed results, including some concerns over the privacy of others around the wearer and assaults on Glass wearers in San Francisco.

Despite this, interest in AR technology remains strong, and the possibilities in the fields of education and communication are simply remarkable. Microsoft certainly agrees: they’ve invested billions of dollars into their HoloLens, and they have every intention of making it all back (and then some)!

So there you have it. Two very different approaches to new realities, but both infinitely exciting and full of possibilities!

Which are you most looking forward to? AR or VR? Let us know in the comments below.