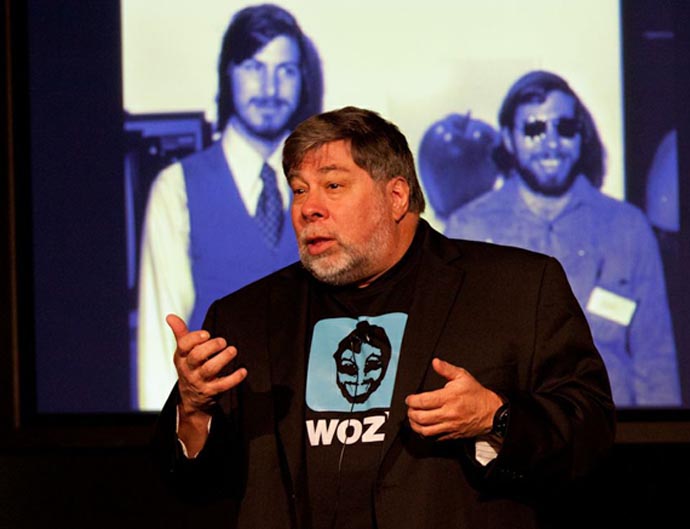 “Nothing can ever just be ‘good’ at Apple. It has to be ‘insanely great’.”

Of all the nuggets of history, anecdotes and business mantras that come up during the day, ‘insanely great’ is what best describes the atmosphere in the room at the Perth world premiere of Woz Live – The Apple Story, presented by Steve Wozniak.

Woz, as he is affectionately known, co-founded Apple Computer Inc with Steve Jobs back in the shaggy beard days of 1976 – in a garage of course. Perth (where all great companies start in garages) was the starting point on his first ever live tour ahead of similar events in Sydney and Melbourne.

Naturally, I was curious to meet the man I’d long assumed to be Jobs’ polar opposite, the techy Yin to his Job’s Zen Yang.

I was intrigued to discover Woz was more like the late Jobs than I’d have ever guessed. Woz spoke of fervently wanting to be part of the revolution, to shake things up, to value the intrinsic rewards of having passion for what you do. This passion truly shone through from the moment Woz began his off-the-cuff speech.

Woz was friendly and charming, generous with his time and very obliging to stop for fan photos being snapped on iPhones during breaks.

Sporting a suit, but with blue sneakers as a nod to customary Silicon Valley fashion, the man “once too shy to be on stage” gave an animated, captivating insight into his life. When asked about his favourite apps, he admits to enjoying playing Words with Friends and loving the intuitive Siri assistant function long before Apple ever bought it.

He spoke fondly of sneaking into the Berkeley University computer lab after hours because he couldn’t comprehend a computer sitting unused overnight, building his first floppy disk drive in two weeks to score a company trip to Las Vegas and his history-making friendship with Jobs after the pair met in 1970.

Woz, who is hugely dedicated to improving education through technology, from a young age pondered whether to become an engineer like his father or a 5th grade teacher.

Luckily for all the Apple fans out there, Woz settled on electrical engineering; designing computers was “just something he did for fun”. That was until Jobs convinced him they could start a business selling Woz’s fully assembled Apple I computers.

The two Steves sold their most treasured possessions – Woz his HP scientific calculator, which he affectionately described as “the iPhone 4 of its time”, and Jobs his Volkswagen van, an ironic reflection of their two different approaches to life – to begin assembling Apple I’s in Jobs’ garage. The rest, as they say, is iHistory.

Woz had a simple goal “to have a positive impact on people’s lives.” With Apple products now such a core part of our lives, it’s safe to say Siri would answer he has achieved just that.

This blog is part of a series on the recent iiNet WOZ Live events in Perth, Sydney and Melbourne.

Check out part 2 for Woz’s secrets to success and part 3 for Woz’s tech predictions for the future.