6 next-gen products to keep an eye out for

We live in an exciting time for technology and it seems like every other day there’s another great idea that’s being brought into reality by today’s bright minds. If you’re fascinated by the developments in tech, one place where you can get a glimpse of what may be in store for the future is Kickstarter, a crowdfunding website where innovators pitch their ideas in the hope of raising the funds to get their creations into production.

We’ve rustled up some of the most impressive and interesting tech that could be out of development and into the big, wide world in the near future. These cutting-edge gadgets and technological solutions are definitely good additions to any tech-lover’s wish list!

We have a soft spot for smart home tech and the Sense has the potential to make your home a whole lot smarter, plus it can keep you clued in about your surroundings. Sense is an itty-bitty gadget packed with a wide range of sensors – connecting with an app on your smartphone or tablet, it can keep track of the temperature, humidity, air pressure, noise levels, light intensity, GPS location, and carbon dioxide (CO2) levels in the room. It can even detect sudden movements! You can place multiple Senses in different locations around your home or even carry one on your person – the devices will also integrate with other smart home devices such as Amazon Alexa and Google Home.

The trick to using Sense is to set up the app to get the notifications about stuff that’s important to you in your daily life. For example, temperature sensors can help you keep your home as cosy or cool as desired. The sudden movement sensor could alert you to opening doors, and people with sensitive skin may even want a notification when the air gets too dry. With a hearty one-month battery life, there’s a lot these little guys can do – and if you ever lose one, the GPS tracking can help you find it again! 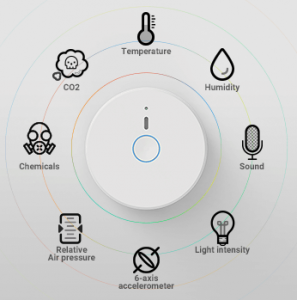 Picking up rubbish probably isn’t the first thing that comes to mind when you think of fun and games but the Trashbot, developed by Urban Rivers, aims to change that! Much like most rivers in urban areas, the Chicago River in the USA has a lot rubbish that needs to be removed, especially plastic waste. Having a person go around on a kayak with a net just wasn’t getting the job done, so the team turned to robotics for a solution. The Trashboat is fitted with a camera and can be remotely controlled to spot rubbish on the water’s surface and herd it to a safe location where it can be collected for recycling or disposal.

What makes the project truly interesting is that the ultimate goal is to make the process like a game where anyone can take turns controlling the Trashbot through a website. Development is still underway (you can read about the latest update here) but we think it’s an ingenious way to get robots and humans working together for a good cause and we’d like to see it happen here at home! Drones, or miniature Unmanned Aerial Vehicles (UAVs) have surged in popularity over the past few years. What was once a device used almost exclusively for military operations has become more mainstream with drones now playing a part in scientific research, agriculture, product delivery and of course, aerial photography. So what makes the LeveTop Drone special? For starters, its 1080p digital camera has a built-in stabiliser, meaning you can capture crisp, high-quality footage with ease. The LeveTop is also capable of autonomous flight, so if you’re not the best flier, no worries! The take-off, flight and landing can all be taken care of with just one click. The four propellers also fold down into the body of the drone to make it easy to transport between flights.

With a 20-minute flight time, the LeveTop can out-perform drones at a similar price point and it has a much lower price point than other drones with similar performance specs. Who knows – in the near future, drones could be the go-to device to capture those perfect panorama shots and group photos! 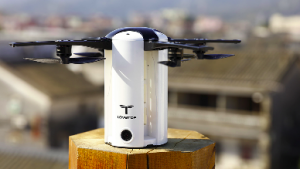 The drum machine changed the face of the electronic music scene in the 1980s. Fast forward to 2018 and Oddball is here to make the technology more portable, social and just plain fun than ever before! The clue is in the name – Oddball is a ball that you can bounce, throw, slap and dribble to create sounds using the pressure sensors inside. The devices connects with an app that can be used to tweak the sounds you’ve created and then set them on a loop so you and record more sounds and layer them until you’ve got your track just right.

Naturally, music is meant to be heard by more than just one set of ears so once you’re done, the app’s social feature can be used to share your track with your friends and other creators across the web. For those with really good hand-eye coordination, you can even sync up more than one Oddball to the app – the possibilities for experimentation are endless!

We may still be a long way off the flying cars we see in sci-fi movies but the team at Simplistyk have found a captivating way to use levitation in the LeviZen. This device puts a serious scientific twist on home décor! The clever design uses high frequency sound waves to trap droplets of water, causing them to levitate mid-air. If that sounds like a headache, don’t worry – the frequency of the sound waves is so high that it’s not audible to our ears (it hasn’t yet been confirmed if it’s inaudible to dogs, but we’d hope so!). For added affect, the base of the device includes two small lights that can illuminate the water droplets and make it look like they’re glowing. This is the first kind of levitation we’ve seen that hasn’t relied on magnetic fields and it just goes to show that anything is possible when it comes to the world of science! If you like getting outdoors, the GoSun Fusion cooker brings science and the outdoors lifestyle together by harnessing the power of sunlight and vacuum insulation to cook meals with five times the energy efficiency of a normal oven! The cylindrical cooking dish that pulls out of the centre of the cooker has a 3.2L capacity, which is enough for roughly five meals. Why a cylinder, you ask? Simple – it’s designed that way so the cooker can be rotated to get the most sunlight at any time of day. You can also set up an additional solar panel with a power bank to save energy for night-time or rainy-day cooking but if you really get stuck, the GoSun Fusion has a 12V power jack that will fit the power port on most cars, boats and RV batteries.

We Aussies certainly have no shortage of sunlight throughout most of the year, so this would be a sound investment for any happy camper, fisherman, beachgoer or even just someone looking for a way to cook without using a drop of fuel. 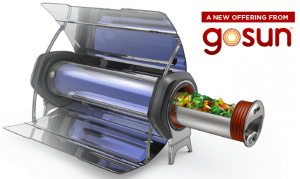 Have you see an awesome next-gen product that you’d love to get your hands on? Tell us about it in the comments.