Celebrating 25 years connecting you to the ‘net! 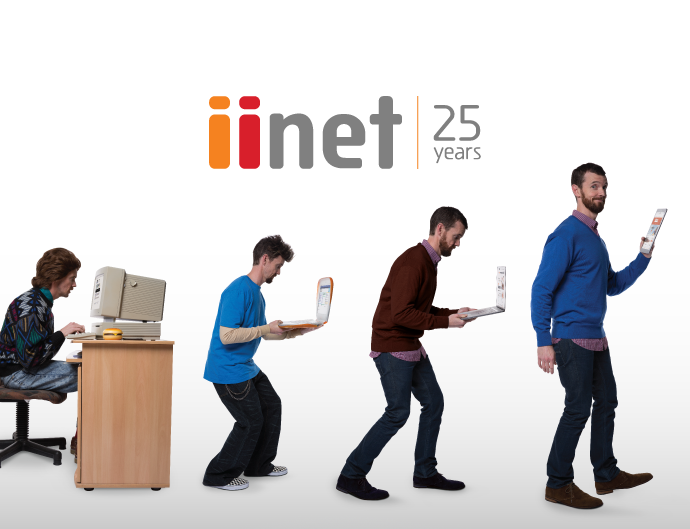 Happy birthday to us! On the 23rd of October, we celebrated our 25th year of proudly connecting Australians to the ‘net. That’s right – it’s been a quarter of a century since the company was founded in Perth, WA, 1993. So how did iiNet come about? Well, Michael Malone and Michael O’Reilly got a taste for the ‘net at university and were passionate about making internet access available to the public, so they set up their own ISP company from the glamorous location of the Malone’s family garage. At the time, “MM-net” was taken, so they settled on the next best letter from their first names to create iiNet!

In the years that followed, iiNet Limited grew as a successful dialup provider and was publicly listed on the Australia Stock Exchange before the turn of the new millennium in 1999. Things didn’t slow down from there! Here’s a quick recap of some of our crowning achievements.

We’ve come a long way since the humble days of dialup! In 2000, we released a wave of next generation internet plans: ADSL, Cable and Cityspan Wireless.

In 2005, we were the first provider in Australia to provide large-scale, premium-grade Voice over Internet Telephone (VoIP) services to give Australians access to substantially lower call rates with no monthly rental fee. Even today, you’ll still find VoIP included with our NBN Fibre plans!

Later on in the same year, iiNet also became the first ISP to offer super fast ADSL2+ broadband on a national scale, provided on our very own iiNetwork.

Changing the way we serve customers

In 2006, we finished implementing our world-class Virtual Contact Centre (VCC) spread across three locations in Perth, Sydney and Auckland. With more sophisticated reporting techniques, we were able to better manage the entire customer service experience, meaning more satisfaction for our customers.

More innovation with the NBN™ and Fetch entertainment

In 2007, we were still leading the pack by becoming the first national provider of Naked DSL. Unlike ADSL2+, Naked DSL delivers broadband without a landline phone so Aussies could kiss monthly phone rental fees goodbye!

Our iiLabs team were also making waves in the world of broadband hardware. In 2009, we brought our very first modem into the world – BoB, or Box of Broadband. Hallelujah!

In 2010, we were excited to launch Australia’s first terabyte data plan on the NBN™ (that’s 1000GB)! These days, we just offer plans with Liimitless NBN™ data instead – it means no one has to count to a thousand!

In 2013, we partnered up with Fetch to bring all your entertainment to one place by offering the second generation of the Fetch set top box with compatible iiNet broadband plans. Today, we’re on the third generation of Fetch boxes with the ultra-slick Mini and Mighty.

And of course, award-winning customer service every step of the way

We’re still carrying on this tradition of awesome customer service today. In 2017, our NBN™ customers were found to be the most satisfied in not one, but two major, independent Australian market research surveys carried out by Choice and Canstar Blue. Plus our Small Business Broadband customers have received Canstar Blue’s Most Satisfied Customers award for the fifth year running! This year, we’re also performing strongly in the Roy Morgan Home Broadband Service Provider Customer Satisfaction Monthly Awards.

Not only that, but we also picked up another international award – a Silver Stevie® Award for Contact Centre of the Year (Over 100 Seats) in the Technology Industries category. We’re thrilled that our hard work is still being recognised on both a national and international scale because our iiTeam is genuinely passionate about customer satisfaction.

The team here at iiNet is extremely proud to reach this important milestone in connecting Aussies to the internet. As part of the celebrations, we’ve asked a familiar face to help spread the word about our industry-leading customer service that’s carried on through the decades. Our friendly Irish spokesman, Finn, made his debut in our ads for the iiNetwork in 2009 and he’s been with us ever since.

Check it out for yourself right here:

For even more details about iiNet’s rich history, check out the full timeline on our website.