Evolution of the mobile phone 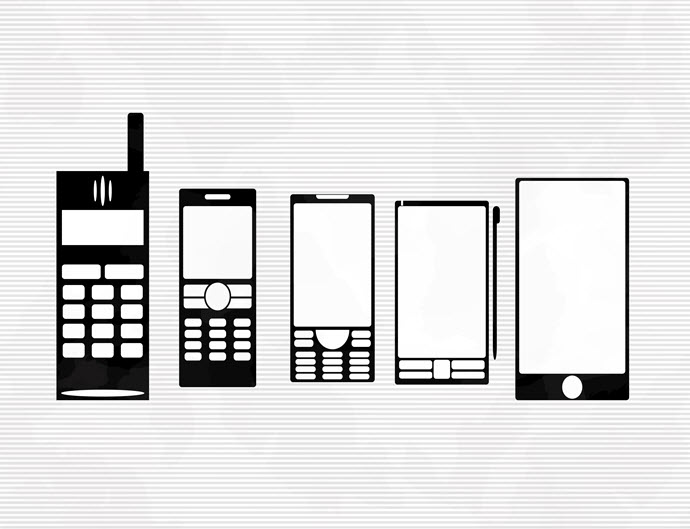 The pioneer first version of almost any technology usually seems ridiculous when compared with today’s sleek and sexy models.

A perfect example of this is the mobile phone. Can you even remember what your first mobile phone was, or does it seem like a very distant memory now? It’s not a surprise if you have trouble remembering, as mobile technology has come so far since its humble beginnings.

Let’s walk down memory lane and see how we went from giant bulky devices that cost thousands to the sweet little smartphones we know and love today. The Motorola DynaTAC 8000X was a handful. This giant is considered the first widely available mobile phone. Well, it was available if you had a spare USD$4,000 to splash on it back when it debuted in 1983. This behemoth weighed almost 800 grams and was 33 centimetres long. It held 30 numbers, leading to the daunting task of prioritising the ritziest business contacts amongst high-flying executives. The phone took a long and painful 10 hours to charge fully. Motorola was at the forefront of another mobile phone innovation with the release of its clamshell MicroTAC in 1989. This was a smaller device (but still a brick when compared to today’s phones) that that had a flap on the bottom half that folded open. The MicroTAC helped inspire the flip phone movement of the early 2000s. The phone also represented a more portable mobile, allowing people to talk the talk while they walked the walk. A few years later, Nokia made a big splash in the market by continuing the trend of small, portable mobile phones. In 1992 the company unveiled its Nokia 1011, named after the date of its release, 10 November.

The Nokia 1011 boycotted the popular flip design, opting for a thinner, more rectangular look. The device held a staggering (for the time) 99 phone numbers and had a pull-out antenna. The 1011 was one of the first phones to bring mobile technology to the masses.

The rise of PDAs In 1993 Apple debuted its Newton Personal Digital Assistant (PDA). While it was not the first PDA to hit the market (The Psion Series 3 had been released in the UK two years earlier), the Newton brought PDAs to the US and helped nurture interest in the technology.

The Palm Pilot, launched in 1997, was a more affordable PDA that allowed owners to connect to the Internet and utilise a touchscreen keyboard with a stylus. These units are a far cry from the Apple and Android machines of today, but PDAs certainly helped lay the platform for the smartphone revolution. The late nineties and early noughties were dominated by small rectangular phones. Nokia, joined by Samsung and Ericsson, led the way, moving hundreds of millions of their chunky mobiles.

The phones initially came with protruding antennas that eventually gave way to a smooth top with built-in frequency-finding tools. Their small size and durability made them a hit and saw them stuffed in to countless pockets and purses. Millions of hours were spent playing and trying to beat high scores on Snake.

The introduction of predictive texting birthed a new wave of abbreviations and punctuation combinations that would evolve into emojis. A few years later, texting’s rapid rise even led to phones with physical keyboards.

Getting a better picture The mobile phone reached new heights with the introduction of colour displays. Gone were the dark ages of black-and-white and hideous greyish greens, as we entered the beautiful new realm of bright, shining pallets of colour.

The early 2000s also saw the glorious marriage of phone and camera. The first camera phone was released in Japan in 2000. Within a couple years the technology had spread across the globe, enabling users to snap selfies at will. The Blackberry 5810, released in 2002, was the first of the company’s devices to combine their PDA services with the ability to make calls through a headset. A year later the company introduced a colour screen and calling capabilities without the headset. The movement toward the smartphones of today was gaining steam. Users collected the Blackberry PIN numbers of their contacts to send messages, while browsing the Internet on a phone became easier with the Blackberry’s large screen and keyboard. Motorola unleashed the Razr, its futuristic-looking flip phone with questionable spelling, in 2003. The slim phone came in a variety of colours and was light and easy to carry, signaling the beginning of the end of Nokia’s small brick-shaped dominance. The mid-2000s saw internet connectivity (though still in its infantile stages) and handsets that flipped and slid open become the norm. The technological world experienced a seismic shakeup in 2007 when Apple debuted its shining beacon of mobile phone glory: the iPhone. Apple’s entry into the mobile phone world sent shockwaves through the market. Redefining what a mobile device could be, the iPhone came with storage for tons of tunes and an enhanced camera.

The design was a game-changer, leading to the crushing demise of flip and slide phones. Nokia and Blackberry, two companies that dominated the mobile market for years, were now yesterday’s news. The increased digital storage, avalanche of apps and unprecedented internet interactivity of the original iPhone have come to characterise the smartphones we use today.

Today, Apple’s iPhones and Samsung’s series of Galaxy smartphones lead the way when it comes to smartphone functionality.

One can’t help but wonder excitedly what marvels of mobile innovation will be the next to take the world by storm and render all previous devices obsolete.

What are your predictions for the future of mobile phones? Let us know in the comments below.