Fibre to the Distribution Point – the new nbn technology 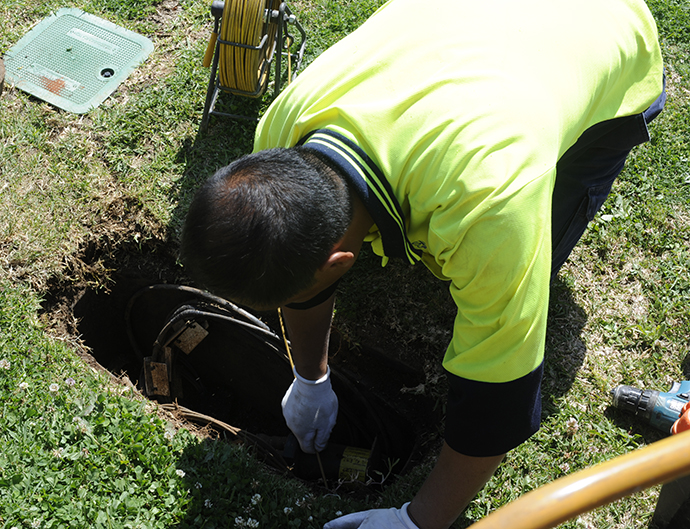 The iiNet experts have been keeping people in the loop about everything they need to know about the nation’s superfast network, the nbn™, and the multi-technology mix (MTM) that is going to bring it to them. That’s why we’re here to let you know that a great new technology could be thrown into the mix for many lucky residents.

Fibre to the Distribution Point or FTTdp is the new technology which could be a game-changer in delivering fast and reliable connections to homes and businesses around Australia. nbn™ have announced a field trial of the technology is due to commence in April. So what exactly is FTTdp, and what benefits will it bring to the Australian people? Well, we’ve got the answers for you.

FTTdp is similar to Fibre to the Node technology in which nbn™ fibre runs from the nbn™ network to point of interconnect and then terminates at cabinet/node near the group of premises it will be servicing, and then utilises the existing copper network to connect each individual premises. However, for FTTdp, instead of a node in your street, FTTdp delivers fibre to a “distribution point unit” or DPU near your premises before connecting via the copper network to your residence.

The benefits of an FTTdp connection

So you’re probably wondering how delivering fibre to a DPU differs from delivering it to a Node. It relies less on the copper network than FTTN, with only 10 to 200m of copper connection in an FTTdp connection, compared to up to 1km of copper in an FTTN connection, pushing the nbn™ fibre closer to your premises. Even better, because the length of copper network it requires is so short, nbn™ can look at employing G.fast technology: a technology which has been trialled in other countries, which works with 400m of copper or less and uses higher frequencies than VDSL2 technology to achieve even higher speeds.

nbn™ chief executive Bill Morrow expects 300k premises which were going to receive FTTN will be switched to FTTdp. Trials of the technology are due to begin sometime next month in Sydney, Melbourne and other capital cities. If it is a success, FTTdp could start being rolled out in 2017. It’s looking to be used largely in areas with lower population density or areas not suitable for FTTN or FTTP and where HFC is not available.

To see where your exact location stands in the nbn™ rollout process, check out the nbn™ Coverage Checker. This will let you pinpoint exactly where sites have been built or are in stages of preparation or construction. Make sure to register your interest on the nbn™ Wait List and check out iinet’s nbn™ plans to be ready to roll when the nbn™ hits your neighbourhood.