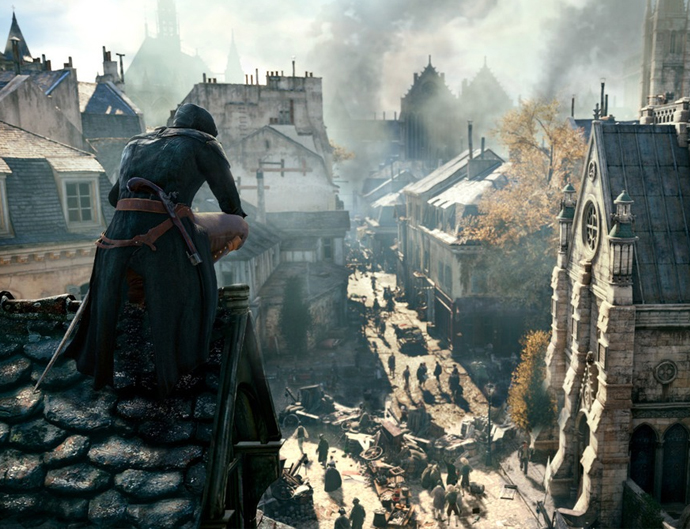 If you’re reading this, congratulations! The deluge of releases in October did not crush you under its avalanche-like weight, and you’re ready and willing to tackle what November holds.

All the biggest names in gaming come out to play this month ahead of Christmas, with new entries in Call of Duty, World of Warcraft, Assassin’s Creed and more. Let’s dive in!

Two creeds for the price of one

For the first time in its history, the Assassin’s Creed franchise is launching not just one but two new titles this year: Rogue and Unity.

Assassin’s Creed: Unity is the bigger of the two, and is set in Paris at the start of the French Revolution (of course) where Assassins and Templars are fighting for power (of course!). It’s looking absolutely gorgeous, and is employing a bunch of new technologies that mean the sheer power of it cannot be contained on older-generation consoles… which is why this baby is exclusively for the PlayStation 4 and the Xbox One. It’s also got sweet drop-in, drop-out co-op!

But don’t despair! Assassin’s Creed: Rogue is actually designed for those people with older-generation consoles who are missing out on Unity. Rogue is in fact only coming to PlayStation 3 and Xbox 360 players, and next-gen owners miss out completely. As the name suggests, this one follows a rogue Assassin who has broken away from the Creed (he’s turned his robe black and become very moody as a result).

PC players are the real winners here — they get both games (although Rogue may take a while). Look for Unity and Rogue on November 13.

Call of Duty comes around but once a year, and this year (on November 4) you can get your hands on the latest in the series: Advanced Warfare. This one marks the first entry into the series by a new studio called Sledgehammer Games, and also marks an interesting departure for the series with the addition of powered exoskeletons, allowing you to jump higher, run faster and punch harder than normal. You can see that in action here (now starring Kevin Spacey!).

If something with more of a sandbox-flair is your thing, you may want to check out Ubisoft’s Far Cry 4, which launches on November 18. It looks like this is going to be quite similar to the very successful Far Cry 3, only this time around it’s set in the fictional Himalayan country of Kyrat — and you can ride elephants. Watch the story and gameplay trailers right here, why don’t you?

Get your dragon on

If roleplaying games are your thing then November is the month for you, because World of Warcraft is launching their latest expansion Warlords of Draenor on November 13. The level cap for the game has been raised to 100, there’s been massive overhauls in all aspects of the game, and heaps and heaps of new content for old and new players alike. Plus if you’re short on time, you can now boost one of your characters to level 90 instantly. Even if you’re not interested in the game, there’s no denying Blizzard’s cinematics are always worth watching, click through and watch this!

For the first time ever in the series, it also has four-player co-op! Watch that in action here, it looks awesome.

Rounding out the rest of the month is the re-release of Grand Theft Auto V on next-gen consoles — PS4 and XB1 owners should look for that on November 18.