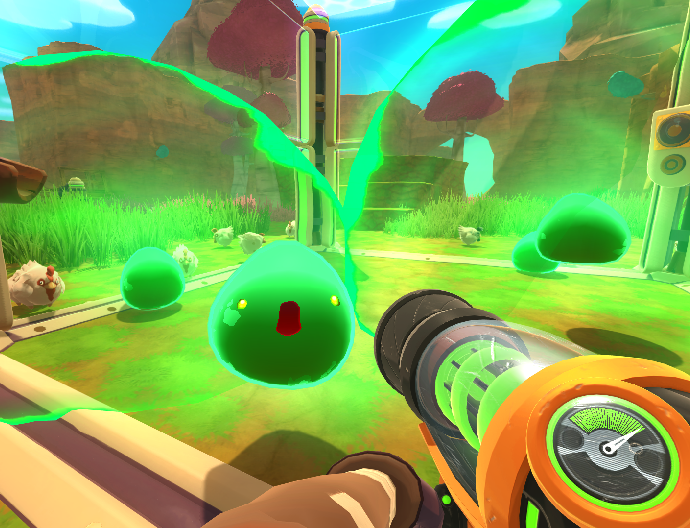 Title: Slime Rancher
Platform: PC (Windows, Mac OSX, Ubuntu)
Developer: Monomi Park
Get it from: Steam or XBox ($19.99 USD)
Suitable for: All ages! I think anyone younger than 7 might have some trouble playing without help, but what do I know about kids? Maybe your kid is a genius.

Getting jiggly with it

As soon as Slime Rancher hit my radar, I snapped it up and devoured it with all the tenacity of a Tarr (I’ll explain what that is in a moment). The game has been available as Early Access for most of 2016 and there have already been several updates to gameplay and graphics plus added slimes and areas to explore. Although the game isn’t 100% finished yet, what’s out right now is definitely enough to sink your teeth into.

The concept is simple: you are the young rancher Beatrix LeBeau, trying to make a living on a distant planet. The best way to make a living? Exploring the planet to capture various kinds of adorable little slime creatures, of course! You suck them up into a portable vacuum-powered storage unit called a Vacpack and then take them back to your ranch, shooting them into a corral or just letting them roam free-range.

Just be sure to suck up some food as well, because the whole point is that when fed, these slimes produce valuable crystals called plorts which you can sell on the Plort Market for Newbucks. With enough Newbucks, you can buy new gear, expand your ranch and upgrade corrals to keep your ever-expanding collection of jiggly critters in check.

If you feel like getting your mad scientist vibe on, you can also cross breed two kinds of slimes by feeding them a different kind of plort to make a really big slime called a Largo. Only two, though – if a Largo is introduced to another kind of slime and eats one of its plorts, it will mutate into a snarly monstrosity known as a Tarr. The Tarr are generally a bad time – not only will they infect all the other slimes in the area like some kind of gross computer virus, but they will also try to eat you. Your only option is to get the Tarr in contact with water and wash everything clean to save your smaller, cuter slimes.

I feel like I don’t really need to go into detail on the utterly gorgeous, vivid landscapes that Slime Rancher has to offer (just let your eyes decide) but what really made the game so endearing to me was the use of sound. Apart from all the buoyant bloops and squishy splats you could dream of in a game about adorable balls of goo, the slimes also coo and babble to each other in tones to match the expressions on their tiny little faces. The thunk as you jettison a Tarr or a particularly annoying Largo into the abyss of the ocean is immensely satisfying, not to mention the subtle changes in the sound track when danger is around.

There’s a fairly healthy balance between the resource management and exploration elements of the gameplay; different areas hold different slimes and resources, and you need to find them all if you want to really maximise productivity. You can’t just waltz into these new areas, though – you need to find a key. I don’t want to give the game away, but it has something to do with some giant slimes (Gordos) living out in the wild, and they’re not all that easy to find.

Take this with a Largo-sized grain of salt since the game is still Early Access and undergoing continuous improvements, but it feels like it’s too easy. Once I had a booming operation set up (literally) churning out all kinds of plorts like clockwork (utterly destroying the value of the Plort Market) I was racking up more Newbucks than I could spend. This works well for the challenge mode where you rush to earn as many Newbucks as possible in 5 days, but in adventure mode it feels like it paces things far too quickly.

Given that the game has proven immensely popular with adult players as a way to de-stress and unwind, I’d appreciate a hard difficulty setting with more expensive upgrades that take longer to earn. That way, the kids could still muck around in easy mode.

If you’re usually a bit iffy about buying Early Access games, I’d urge you to reconsider for Slime Rancher. Monomi Park have a clear development roadmap in place and the end result is shaping up to be a really cohesive, enjoyable game. Not only is Slime Rancher well designed, but it’s also unexpectedly soothing – I’m not the only one raving online about its excellent stress relief qualities.

That said, the developers have confirmed the price won’t be changing once the game is out of Early Access, so there’s no harm if you prefer to wait for all the content to be developed – apart from all the fun you’re missing out on, that is.

Have you played this game? Tell us what you think in the comments.