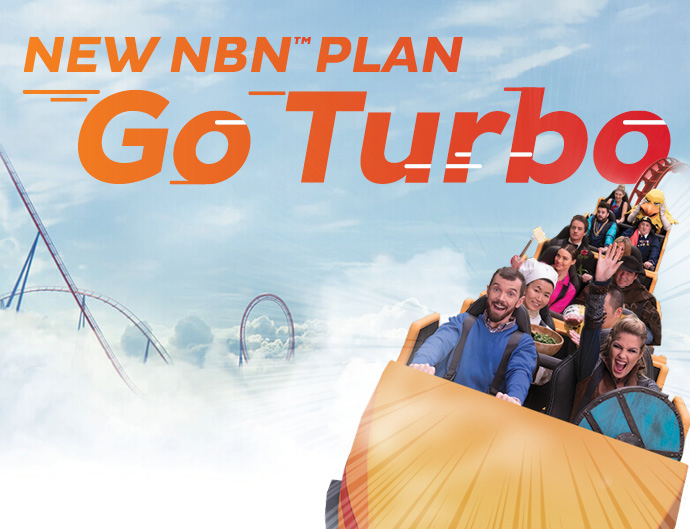 We’ve got great news for our NBN™ customers – we’ve replaced our Boost plans with Turbo at no extra cost!

Our brand new Turbo NBN™ plans are available across NBN™ FTTP, FTTB, FTTN, FTTC & HFC technologies, with our most popular plan offering Liimitless NBN™ data for just $79.99 a month on a no lock-in contract (min charge $159.94).

Unlocking the potential of the NBN™

Turbo NBN™ plans are a great way to start the New Year as they allow more customers to reach the full potential of their NBN™ connections for the same monthly price. Customers whose connections were unable to achieve the speeds that would make upgrading to a MAX plan worthwhile will be please to know that Turbo plans can achieve faster speeds than the Boost plans allowed.

Customers whose connections are more suited to a Boost plan aren’t put at a financial disadvantage, either – our new Turbo plans cost exactly the same as our old Boost plans!

How fast is Turbo?

The release of our new plans coincide with new guidelines from the Australian Competition and Consumer Commission (ACCC). iiNet is among the first Internet Service Providers to follow the ACCC’s guidelines on advertising NBN™ with typical evening speeds. Basically, this is a national measurement of download speeds between 7PM & 11PM, local time.

Please visit our website to see the current evening speeds for iiNet NBN™. You can also use our speed test tool to check your internet speed.

Measuring speeds during this busy period provides a realistic guide because performance issues are most likely to occur when the network is at its busiest. There are a number of factors which can affect NBN™ speeds, so be sure to check out our NBN™ Speeds Explained article for more information.

If you’re getting iiNet NBN™ for the first time, you can select these great new plans when you sign up. If you’re already with us for the NBN™, you can upgrade your plan in Toolbox – it even has a handy video tutorial!

If you’ve pre-ordered one of our old Boost plans, you don’t have to worry about changing plans – we’ll take care of it for you! Keep your eye out for an email over the next fortnight advising that your pre-ordered NBN™ plan has been upgraded to the Turbo plan for exactly the same price.

If you’re ready to go Turbo or keen to find out more  about our NBN™ plans, hit the button below or give us a call on 13 19 17 and we’ll be happy to help!

Check out our NBN™ plans