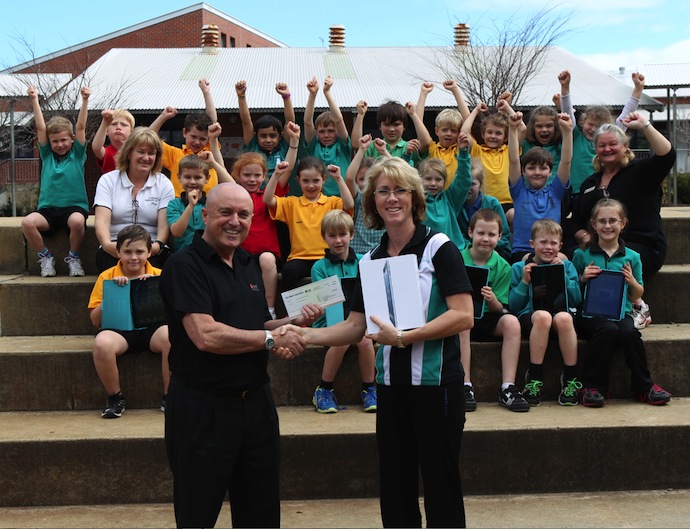 Parkfield Primary school teacher Katheryn Perks was all smiles on Wednesday when she accepted a $5,000 cheque from iiNet and the West Australian newspaper, on behalf of her school.

The competition, which iiNet sponsored in association with ‘The West’ was aimed at primary schools. It required the school community to send in coupons snipped from the daily newspaper. Each school was also asked to indicate a wish as a part of its entry, explaining the purpose for which the prize-money would be used. There was no hesitation on Katheryn and the school’s part – they were already successfully using iPads, following a trial to improve literacy and numeracy at the school. The only thing in the way of extending the benefits of the trial was the number of iPads available to the kids. The big plan: win the competition, buy more iPads!

iiNet exec, Steve Dalby made a visit to the school to present the winner’s cheque and then surprised the school with a bonus iPad, courtesy of iiNet.

School Principal Charlie Serravite joined with Steve, deputy principal Zena Dyer and educational assistants Theresa Ugle and Alison Walton in Mrs Perks’ Year Two class to share the good news.  While there, Katheryn provided a short demonstration of some of the applications used by the Parkfield Year Two children. She demonstrated how the school was successfully exploiting the iPads to motivate the kids and improve literacy and numeracy outcomes.

Amongst other things, the iPads are being used by the Years Twos to research topics for report writing – reports that still had to be done the ‘old-fashioned’ way with pencil and paper. The added sizzle was delivered by use of an app called Popplet that aided in structuring the research questions each child needed to answer and (using the iPad camera) taking a photo of the obligatory drawing in the report. Subsequently (say on parent night) holding the camera over the report (as a scanner) triggered the Aurasma app to provide the details of the research material sourced by the child for that report. Pretty cool.

After final congratulations, Steve asked Katheryn if she could direct him back to the school office so that he could sign out. Straight-faced, Katheryn just said “Use the app”. Katheryn had created an app for the school, which is used for a range of things including absentee notes, messages to parents about events (e.g. “swimming has been cancelled”) and newsletters, it also has a map of the school. Quickly found and downloaded, Steve opened the map on his iPhone and followed it back to the office, wondering what his Year Two teacher would have made of it all – way back in 1958!

Parkfield certainly seems like a school for the times, using whatever tools they can acquire in order to improve the education of the children in their community. Coincidentally, Parkfield PS is the same age as iiNet, having turned 20 this year.

Photo: Courtesy of The West Australian.