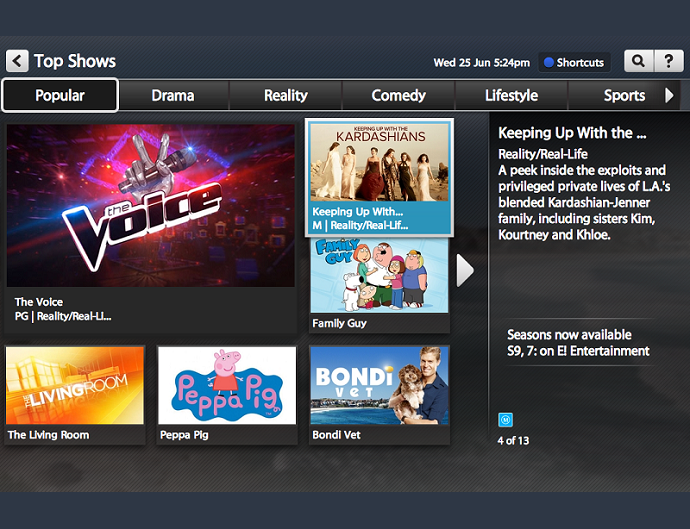 It’s no lie that we love updating our iiNet TV with Fetch viewing experience. So when we go ahead and make a whole heap of improvements, we want to tell as many people as we can.

If you’re already an iiNet TV customer then you’ll now have a whole new array of features to play with. For customers yet to take the plunge with iiNet TV, there are now more and more reasons for you to join in on the fun.

Catch up TV is making massive strides in Australia. iiNet TV customers are already devouring content through ABC iview and SBS On Demand and now, Channel 10 is now getting in on the act with the release on TenPlay to iiNet TV!

Just head to the Catch-up TV menu on your set top box and catch up on all of your favourite shows from 10, with 24/7 access to Channel 10, Eleven and ONE. Episodes are added to TenPlay as soon as they’ve aired live and remains on TenPlay for between 7 and 30 days after airing (depending on 10’s agreements with the various content owners).

Keep track of your favourite shows

Another new feature which is sure to get one hell of a workout is our new Top Shows menu. With this menu, you won’t have to wade through all of the shows you don’t want to watch, because we’ve made it easy to keep track of popular shows. And by “keep track”, we really mean “provide an awesome place where all the top shows are grouped by genre so you can avoid having long lists”.

Recording shows made much better!

TV shows running late is a common complaint of many, especially when you’re trying to record a show and you set your recording based on what time the show is supposed to air. Well, you don’t have to worry about this anymore.

In a clever addition, the set top box will know when a show is running late, and will automatically extend your recording until the show is completed. That means no more missed endings, and no more having to rely on friends telling you how your favourite show ended!

Please note: this feature is for Generation 2 set top boxes only.

Who wants a taste of entertainment plus?

For customers without our Entertainment Plus package, we wanted to give you a permanent preview of what you can expect if you upgrade your service – that’s why we’ve created a new channel for you. Head to our Entertainment Trial Channel (CH999) from 7 July and you’ll see a different channel being played every 14 days, starting with Nickelodeon.

From time to time you will notice an actor image appearing in the first image tile on the main menu.  If you select the image it will open up a screen showing you all other movies and shows available featuring this actor.  You can then rent, wishlist or record from this screen as you please.  It’s a perfect way to overdose on your favourite stars.

Last but not least

Finally, we’ve gone and added a new app top the Apps menu (Menu > Apps > Featured) where you can view a range of helpful hints and tips on how to use your iiNet TV service. We’ll continue to add more hints to this menu as we go along, hopefully asking any questions you might have about your iiNet TV service.

So there we have it! It’s been a big month in the iiNet TV world as we supersize your viewing experience with one great add-on after another.

If you’re not an iiNet TV with Fetch customer then what are you waiting for? With a world-class set top box ready to record your favourite shows on a massive 1TB hard drive, over 3000 movies available to rent, outstanding add-ons and international TV packages for TV lovers, you can’t go wrong.