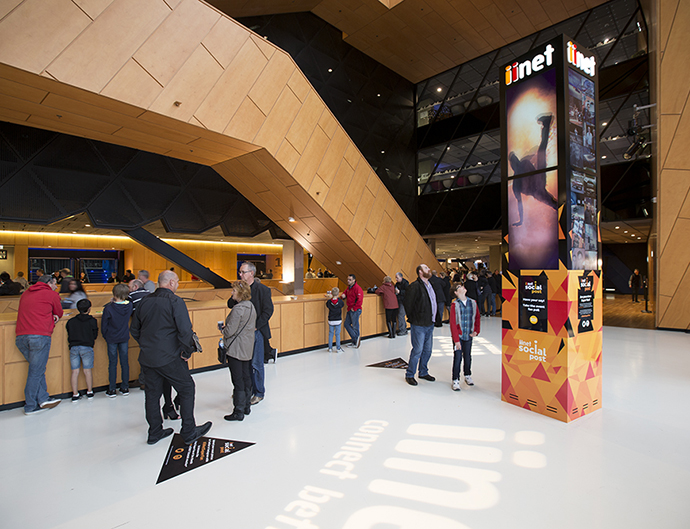 If you’ve been to a concert or event at Perth Arena recently, you might have noticed the four and a half metre tall iiNet Social Post on Level 1. It’s a pretty impressive piece of tech on its own, but our hopes are for it to be a fun and interactive experience for patrons.

The next time you head to Perth Arena, don’t just walk on by, get up close, get hands on and take advantage of the pole’s great features. You can even win great prizes!

The social post is set up with a hashtag rule, so that when you upload photos to your Twitter or Instagram account with the hashtag #iiNetSuperFan, your photo will appear on one of the posts digital screens.

Not only is it cool to see your pic up on the screen, but by using the hashtag #iiNetSuperFan you go in the running to win a prize. Be creative with your photos, as we choose the best photo of the lot to be the winner. Terms and conditions can be found here (prize is subject to change). When you get up close to the social post, you’ll notice it has two touch screens: one on either side. At each Perth Arena event we run a fan poll on the touch screens.

Have your say by voting in the fan poll, and make sure to finish the vote by including your email address for a chance to win a prize. More details about the iiNet Fan Poll competition can be found here (prize is subject to change). So next time you’re at Perth Arena, make sure to check out and have a play with the iiNet Social Post. Who knows? You might even win an awesome prize as the cherry on top of a great night at Perth Arena.

iiNet has been a proud founding partner of Perth Arena since the venue opened in November 2012, providing free WiFi access for over 2.1 million people who have visited the venue for over 240 major events.