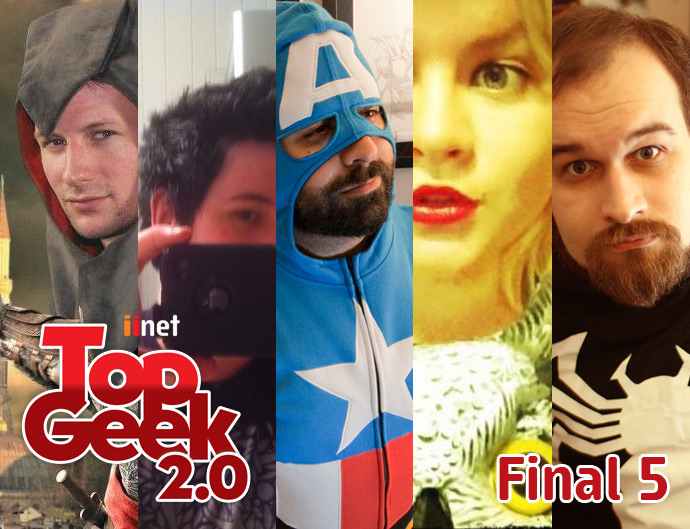 Things are hotting up in TopGeek 2.0!

After some tough decisions by our esteemed panel of judges, we now have our final five who will compete in our live TopGeek 2.0 final in Perth on May 10th.

Our art geeks were tasked with describing the geek of the future, putting their imagination and creative skills to the test in our video challenge.

The judges were extremely impressed with the passion and creativity shown in the category but there could only be one finalist.

Rhiannon Davies wowed the judges with a song penned especially for the competition laying out her vision of ‘The Geek of the Future’. Her humour, fantastic voice and clever concept landed her top marks in the Art category.

Our game geeks live, breathe, eat and sleep gaming so we were sure they had some geektastic ideas for a game they always wish someone had made.

They didn’t disappoint and we had a wealth of genres, concepts and suggestions from our game geeks about their ideas for the next big geeky game sensation, from first person shooter games to what could be the next mega franchise craze!

Steve Wright beat stiff competition in the gaming category with his pitch for the next big thing in gaming which poked fun at existing games, laid out his marketing strategy to get rich quick with the game all the while showcasing his geeky love of gaming.

Our Tech geeks turned mad scientist to come up with an invention or must-have gadget.

While the Tech geeks came up with brilliant suggestions for inventions that have been missing all our lives, Rhys Elsmore came up with a concise solution to simplify our online lives. It’s a bit techy for us, but check out his video which explains it all!

To prove they were top of all things world wide web related, our Internet geeks were challenged to make a viral video.

There were animals, montages, dramatic soundtracks and more but Skaidris Gunsmith, runner up in TopGeek 1.0, won a place in the TopGeek 2.0 final as the Internet geek with his real life nyan cat entry, racking up masses of comments online.

Our fandom finalist is Cem Selamet who came up with the idea for a brand new fandom following involving what Cem claims is Australia’s first superhero. His animated concept for Mustachio, storytelling ability and dramatic video racked up top scores from the judges. So keep your eyes peeled at the next cosplay convention for Mustachio fans!

What’s next for our TopGeeks?

The TopGeeks Finalists will assemble on Thursday 10th for our TopGeek 2.0 live final, presented by none other than geek favourite Lawrence Leung!

To really shake things up, our five finalists will also be joined by People’s Choice TopGeek 2.0, who will be unveiled on May 1st!

Something for all you geeks at home

If you want to get in on the TopGeek 2.0 action, why not download our TopGeek 2.0 iPhone app to discover what you’d look like as a geekified version of yourself and what type of geek you’d be!