What Do You Meme By That? 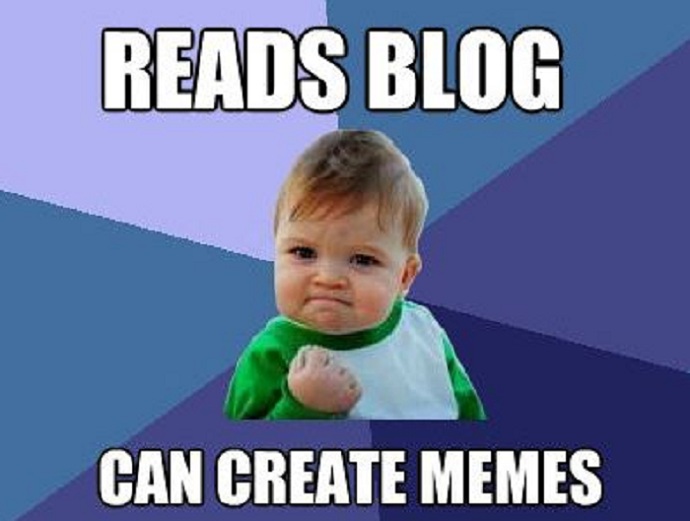 In your travels exploring the Internet, have you ever seen a seemingly odd picture with some funny text? Or the same picture with different variations of text?

You have probably just read a “meme” (pronounced “meem”). But do you know where they come from or why they’re so popular?

The word “meme” is actually short for “mimeme”. This is Ancient Greek for “imitated thing”, or “to imitate” or “mime”. The word “meme” was first used by a British evolutionary biologist named Richard Dawkins in his book The Selfish Gene in 1976. A field study was started in the 1990’s called memetics to explore the world of memes as an evolutionary model.

Looking to a more modern definition the Collins dictionary lists a meme as “an idea or element of social behaviour passed on through generations in a culture, especially by imitation”.

But what are these memes on the Internet?

My own parents have asked me that exact question. My simple explanation would be: a picture with funny captions. As they say, a picture is worth a thousand words. But you’d be surprised how much meaning a single specific picture can convey. Meme’s are a shared understanding, an in-joke that we all get.

They even have their own titles; this little guy (pictured right) is “Success Baby”. The first line above the baby mentions a situation or task that you are doing or have done. The second line below the baby is where you mention the positive outcome. So the meme means: you’ve had success at your task.

But other images can be used for different purposes, such as “Bad Luck Brian”, “First World Problems”, “Toy Story”, “Matrix Morpheus”, “Scumbag Steve”, “Good Guy Greg”, “Overly Attached Girlfriend”, “Futurama Fry”, “One Does Not Simply”, “Waiting Skeleton” and “Drunk Baby”. Don’t worry, that last one isn’t actually a drunk baby, he just looks like he is.

All memes have an origin. You may wonder, how or why did this picture end up becoming a meme? Take “Success Baby”, the image first started as a picture taken by his Mum at the beach in 2007 when the child, his name is Sammy, was simply gripping a handful of sand. It wasn’t until 2008 that the picture started to pop up on social media sites. It first started as an “I hate sandcastles” meme with Sammy in the foreground and the beach in the background. It was in 2011 where the first “Success Baby” started appearing with just Sammy, and the purple background.

Another example is “First World Problems”; they are problems or frustrations only experienced by people in first world countries. The history of this meme is interesting as the term “first world problem” came about long before the meme.

The first reference was in song called “Omissions of the Omen” by Canadian alternative rock band Matthew Good Band in 1995. The term then went to appear on social media sites Tumblr and Twitter in late 2008, however it wasn’t until 2011 that the image of a crying woman with her hand against her face started to be used to form the meme as it is known today. This image is actually a stock image, and has no history with the term itself.

A picture in a meme

Not all memes are pictures with text, a lot of them are just pictures used to poke fun or explain another picture. Some of them are “If you know what I mean”, “Cereal Guy”, “You don’t say?” and “Why don’t we have both?” and many more.

To give an example on using a meme on a picture, I’ll use “You don’t say?”. It is a contour drawing of US actor Nicholas Cage from a scene in the 1988 comedy Vampire’s Kiss. It is used as a sarcastic response to an obvious statement or observation because Cage’s facial expression looks like one you would give when being sarcastic. You would place the image of the obvious statement or observation at the top, then place a copy of “You don’t say?” underneath.

The picture doesn’t have to be an established one on the Internet, if you can add funny captions to a picture- congratulations you have created a meme. One of the things about standard memes is that the context is easy to understand if everyone uses the same picture.

When US pop sensation Beyoncé performed at the American Super Bowl, many unflattering pictures were taken during the performance. When her publicist asked them to be taken down – it had the opposite effect. From that request, the Internet created hilarious memes called “Unflattering Beyoncé.” (Google it, they are hilarious).

Can I make my own meme?

Of course you can. Anyone with an Internet connection can have fun making memes. There are many websites you can use to create and distribute a meme. It is as simple as putting text on a picture. Here are two generators to get your meme creative juices flowing;

We even have a “meme wall” here in the office where anyone can make a meme related to work and stick it on for all to enjoy. Now you can go and start one at your work, be as creative as you like.

Has someone asked you to explain a meme? What’s your favourite meme of all time? Let us know in the comments below.