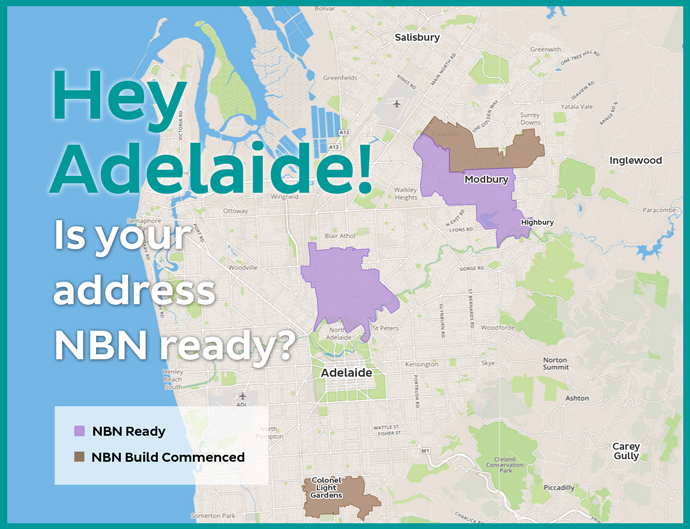 Those looking forward to using the high speeds of the National Broadband Network (NBN) in Adelaide will be happy to hear that there has been considerable progress made in recent months. More locations have become connected to the service, which allows users to experience quick downloading and uploading that will improve overall internet usage in professional and personal facets of life. For more information about the power of the NBN, check out iiNet’s FAQ page.

As of October 2014, several major areas in Adelaide were already connected to the NBN. This included sections of Fitzroy, Prospect, Medindie, Holden Hill, Modbury, Port Willunga, Aldinga Beach, Seaford and McLaren Vale. Luckily for those in this key South Australian region, there has been great progress since then.

Starting in the south, the signs of progress are clear in Maslin Beach, which now is largely covered in connectivity. NBN coverage stretches up the coast through other towns that feature sites that were under construction in October, including Port Noarlunga South.

Continuing north is a pocket of sites where new builds are being prepared. Lonsdale, Reynella, Woodcroft, Reynella East, Old Reynella, Happy Valley, Sheidow Park and Hallett Cove are all included in this space, which is also dotted with several active sites.

A similar area sits in the northwest, where parts of Craigburn, Blackwood, Belair, western Edwardstown, Marion and Bedford Park are all being prepared for building. Construction has started in Panorama and the eastern section of Edwardstown. Further east, Mount Barker, Littlehampton, Nairne, Hahndorf, Verdun, Hannah and Oakbank are all also in states of NBN site construction preparation.

Toward the centre of Adelaide, Walkerville has gone live with NBN connectivity in recent months. Further north, the same can be said for Ingle Farm, which forms a piece of NBN coverage with Modbury and Hope Valley. Para Hills and the area just south of Tea Tree Gully have sites under construction.

There are a handful of other spots that have NBN outposts in various states of preparation or completion. One sits on the coast between Brighton and Glenelg. Staying toward the west, there’s an active site in Findon, as well as several between Woodville West and Seaton and north of Woodville. There are also sites between Largs Bay and Taperoo. And up north, one more major collection of sites is spread between Penfield and Davoren Park and stretches up northwest of Munno Para Downs.

The progress in Adelaide is fairly spread out, covering numerous neighbourhoods and communities. To find out if your exact location is equipped with the NBN, put the address into the NBN Coverage Checker. If your area is not yet NBN-ready, register on the NBN Wait List and browse iiNet’s NBN plans so you can be prepared when the time comes.

Adelaide, the NBN (National Broadband network) is being rolled out and we’re catching up to the rest of the world with our internet service. Increased reliability and lighting fast speeds that are up to four times quicker than ADSL2+ are among the host of benefits that the NBN offers. With the continual rollout of the network, an increasing number of homes and businesses across Australia including Adelaide are gaining access to these benefits.

So where is NBN coverage in Adelaide?

Parts of Fitzroy, Prospect, Medindie, Holden Hill and Modbury as well as suburbs further south including Port Willunga, Aldinga Beach, Seaford and McLaren Vale are already covered by the NBN.

However, much of the NBN rollout in Adelaide to date is still in the planning or construction stages including: Sefton Park, Nailsworth, Collinswood, Vale Park, Walkerville, Gilberton, Para Hills, Para Vista, Ingle Farm and Highbury. Further south, Seaford Meadows, Old Noarlunga, Port Noarlunga South and Maslin Beach are also in either the planning or construction stages.

From the time that building of the network starts in an area, it generally takes around 12 months for access to the network to become available.

What’s the status of the NBN at your address?

The best way to check the availability of the network at your home or business is to head over to our coverage page and enter your details into the NBN rollout map which is updated as the rollout continues.

Looking at the NBN map for Adelaide, the rollout of the NBN is yet to commence for much of the city. But the good news is that new areas are regularly added to the rollout. We can keep you up to date with the rollout and when the NBN will be available in your area, if you join our NBN Interest Register. Simply register your interest here.

The rollout is managed by NBN Co on behalf of the Federal Government. However, only Retail Service Providers (RSP) like iiNet can provide NBN services to your household. If you’d like to take advantage of the lighting fast speeds and greater reliability the network offers, take a look at our NBN plans page.