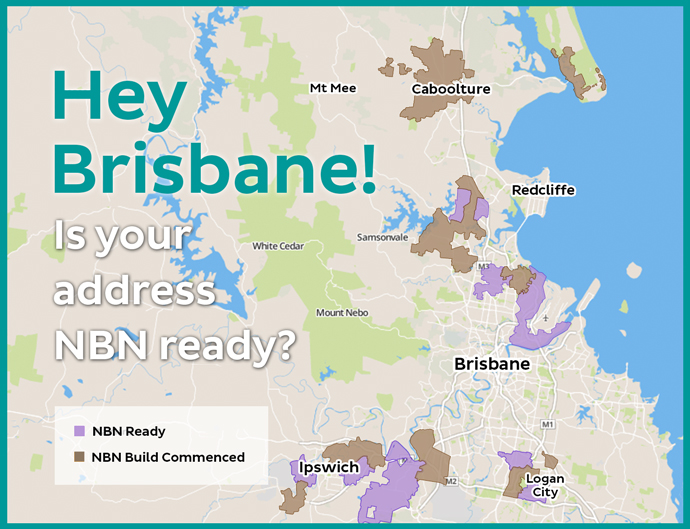 As one of the most populated areas in Australia, it’s no wonder that there’s been a high level of awesome National Broadband Network (NBN) connectivity in Brisbane.

The NBN will change the way we use the Internet, not just in the capital of Queensland but also the rest of Australia. To learn more about what the network is capable of, spend some time on our NBN FAQ page.

By September 2014, much of Brisbane and its surrounding area had already been covered with dozens of NBN sites. The CBD was dotted with NBN connectivity, and that remains the case, with sites that are active and in various states of preparation and build. These can be found in and around South Brisbane, Red Hill, Fortitude Valley, New Farm and Kangaroo Point.

There have been significant steps taken to increase the presence of the NBN in northern Brisbane. Towns such as Caboolture, Caboolture South, Bellmere, Upper Caboolture and Morayfield have sites where progress has started. These will combine with several operational sites to provide a blanket of coverage.

The progress spreads south down the M1 and M3 with a bit of connection around Burpengary. The next big swath starts in North Lakes, where selected suburbs have been enjoying the NBN for a while. It spreads over to Kurwongbah and down through Murrumba Downs and Petrie, another area where users have been enjoying the NBN. Build sites in Lawnton, Joyner and Warner help complete this big stretch of NBN action.

Just to the southeast is another big pocket, including Aspley, Banyo, Nudgee and Nundall where residents have been using the NBN for more than a year now. The pocket extends south through Hendra, Eagle Farm and Ascot. Sites planned in September of last year in Boondall are now being built.

South of the CBD sits a fairly consistent line of sites stretching from Yamanto and Ipswich east to Redland Bay. Sites started last year in Algester, Calamvale, Parkinson and Sunnybank Hills have been successfully swept up in the progress, with some residents already connected to the NBN.

Toward the coast, Mount Cotton and Redland Bay are the focal points of massive build preparation, with a few tiny outposts of availability already operating.

There are even more sites either already servicing areas of Brisbane or in the process of becoming functional. The best way to see if your residence or working space is operating on the network is to type the location into the NBN Coverage Checker. If you’re unsure about when your area will be connected, make sure to register your interest on the NBN Wait List and choose your plan so you can be ready to go when the NBN comes to your neck of the woods.

Under the NBN Co plan for the rollout, 93 per cent of homes in Australia will be connected to the fibre-optic network which will deliver download speeds up to four times faster than the fastest currently available ADSL2+ broadband. There are loads of other benefits too from faster speeds to a more reliable connection.

With the progressing rollout of the NBN in Brisbane, there are a number of areas where NBN coverage is already available, as well as a larger number of areas where the rollout has started and coverage will be available soon. New suburbs are being added to the rollout all the time. If you’d like us to let you know when the network is available at your address, just complete our Register Interest form and we’ll be in touch as soon you’re eligible.

Where is there current NBN coverage in Brisbane?

As shown on the NBN map of Brisbane, small parts of the Brisbane CBD and outer suburbs are already covered by the NBN, however, the areas with the largest amount of current coverage are in the northern suburbs including Aspley, Banyo, Nudgee, Nundah, Northgate, Petrie and North Lakes.

Where else has the NBN rollout to Brisbane started?

The rollout of the NBN is also underway across a range of other areas of Brisbane where either building or building preparation has started. Eagle Farm, Ascot, Boondall, Fitzgibbon, Bridgeman Downs, Carseldine, Algester, Sunnybank Hills, Calamvale and Parkinson are the areas which have the most widespread planned coverage.

Check the availability of the NBN at your address

While we’ve mentioned the areas here which have the most widespread current and planned NBN coverage, there are also a number of other small pockets all over Brisbane where the NBN rollout has commenced. To check if the NBN is available at your address or if it’s coming soon, enter your details in the handy coverage tool on our NBN coverage page and it’ll tell you the status of the NBN for your address.

If you want to take advantage of the NBN and get connected, head on over to our NBN plans page to find the perfect plan for you. Or, if it looks like the NBN is a while away for your area, don’t forget you can register your interest here and we’ll let you know when it does become available.