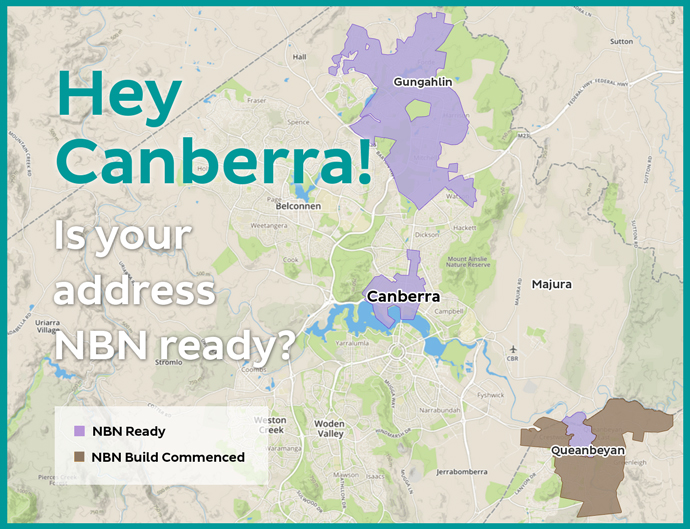 The construction of the National Broadband Network (NBN) is an ongoing process and as much as we’d all like to have ultrafast internet connectivity right this very second, the truth is that it takes time to construct such a large-scale network that spans the whole country.

The good news for those in Canberra is that great progress has been made in the area in less than a year. The city’s CBD was already blanketed in quick and reliable coverage back in August 2014. That service is still humming along nicely, providing users with reliable, fast internet service. Nearby areas such as Ngunnawal, Gungahlin, Mitchell, Franklin, Palmerston, Amaroo, Bonner, Forde and Harrison have also been up and running for months.

NBN coverage has also extended into several other nearby regions. Areas to the west of Moncrieff are in various states of set up, with some users already able to use the network. Building has commenced on a site that will cover Nicholls. Working counterclockwise from there, there is a small outpost of connectivity in neighbourhoods to the northwest of Macgregor and an operating site near the Canberra International Sports and Aquatic Centre.

To the southwest of Canberra, users in Coombs and Wright can take advantage of the NBN, with more sites already under construction. Small spots around the area including Lyons, Phillip, Woden Valley and O’Malley also have operational NBN sites.

People in the Queanbeyan area are getting closer and closer to network access. Since August, those north of the central part of the region, between Crestwood and Queanbeyan East around Oaks Estate, have gotten connected to the NBN. There’s also been a new build prepped south of Queanbeyan West near Lanyon Drive.

Finally, a bit further south near Yarrow, to the west of the Googong Reservoir, neighbourhoods to the south of Googong Road from Gorman Drive down to Rosa Street and back up to Garraway Crescent are either already cruising on the high speeds of the NBN or will be doing so soon.

Do you live in Canberra? To find out if your exact location is already serviced, just punch it in to our NBN Coverage Checker. If the network is not there yet, join the NBN Wait List to make sure you’re alerted when the time comes. We’ll also provide you with the latest news and updates as the NBN continues to rollout across the country.

Just like everywhere in Australia, Canberra and its surrounding regions are under continual construction to bring the benefits of the NBN to an ever-increasing number of users. To learn more about these benefits, read through iiNet’s FAQ page.

The National Broadband Network (NBN) rollout across Canberra is well underway, which means faster, more reliable internet to the increasing number of homes that are connected.

Areas currently covered by the NBN in Canberra

The rollout of the NBN to Canberra so far has seen widespread coverage across the Canberra CBD as well as a number of outer suburbs particularly those to the north. The outer suburbs connected to the NBN include Ngunnawal, Gungahlin, Mitchell, Franklin, Palmerston, Amaroo, Bonner, Forde and Harrison.

Areas where the NBN is coming soon

The rollout of the NBN has also started across large parts of Queanbeyan, Queanbeyan East and Crestwood. In these areas, either building or building preparation is underway. From the time that NBN construction begins in an area, it generally takes around 12 months to be completed and ready for your home to access the network. If you’re in one of these locations, sit tight, the NBN is coming soon!

What about areas where the rollout hasn’t started yet?

While there are many areas with extensive NBN coverage already, as you can see from the NBN map {INFOGRAPHIC], Canberra does have a lot of areas where the NBN rollout hasn’t started yet. Under the NBN Co plan for rolling out the network, new suburbs are being added all the time, and as this happens, the information will be added to the rollout map.

But the best way to keep updated (besides reading the iiNet Blog!) is to sign up to the NBN Interest Register.

The NBN may be a little further away than you’d like but why not enjoy the benefits of being an iiNet customer today?

How to find out if your home is NBN ready

To check if your home is ready for the NBN, just go to our NBN coverage page. You can enter your address into the coverage checker tool which will then show you if the NBN is available at your home.

If you have questions about the NBN, take a look at our FAQ’s page which provides answers to a range of common questions. Or, if you’re ready to connect and need an NBN plan in Canberra, check out our NBN plans page. If you’d like us to let you know when the NBN is available at your place – complete our Register Interest form here, and we’ll let you know as soon as you’re eligible!