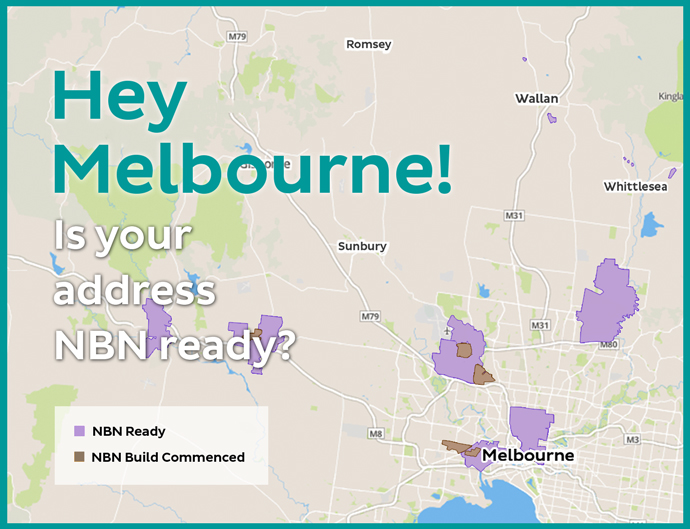 Melbournites like to be on the cutting edge of the newest trends; and getting on board with the expanding National Broadband Network (NBN) is no exception. With high-speed internet that leaves traditional ADSL2+ in the dust, the NBN has the potential to enhance everyday life. To see just how revolutionary it could be, read iiNet’s FAQ page.

A lot of progress has been made in recent months in the capital of Victoria. Back in September, the suburbs of Carlton, Parkville, Brunswick East and some of the CBD were already connected to the NBN. Moving away from the centre of town, Tullamarine, Gladstone Park, Mill Park, Keilor Park and South Morang were also up and running.

In the past several months, hundreds of NBN sites have either gone live or are in stages of planning and building. Starting in the southwest portion of the Melbourne region, large chunks of Werribee, Point Cook, and the section of land including Truganina, Williams Landing, Kingwell, Addison and Elmstead have dozens of NBN sites, many of which are already up and running.

Moving north toward Gisborne, a pocket of connectivity can be found in the area stretching from Maddingley up through Bacchus Marsh to Darley. There is another concentration of NBN sites around Brookfield, Melton, Melton West and Kurunjang. Users to the west of Taylors Hill and Hillside have been shown the NBN love, as have selected areas around Sunbury. Moving east, there are dozens of sites in the pocket created by Greenvale, Yuroke, Craigieburn and Roxburgh Park.

Of course the most concentrated NBN presence occurs in and around the CBD. Those in Footscray and Yarraville are already enjoying super-fast internet, with additional build sites being prepared. Sites dot suburbs such as Southbank, Fitzroy, Cremorne, South Yarra, Prahan and Hawthorn.

Back outside of the city, north of the already established Mill Park and South Morang area, there are many sites ready to serve the area around Mernda and Doreen. And those up in Whittlesea are also speeding along with the NBN. Moving south, Lilydale, Mooroolbark, Wantirna South, Glen Waverly, Mulgrave, Springvale, Brighton, Moorabbin and Highett all have the NBN or will soon.

Finally, a large spread of sites and coverage sits in the southeastern portion of the region. It starts in Mornington and moves up through Frankston, past Cranbourne and Officer to Pakenham. Further east, the areas around Tynong North, Nar Nar Goon, Tynon, Cora Lynn, Modella, Yannathan, Monomeith and Koo Wee Rup are also set up for NBN connectivity.

Thousands of users are already able to enjoy the great benefits of the NBN. To get a better view of operational sites and the progress being made elsewhere, poke around on the NBN Coverage Checker to see where your street is on the rollout map.

Registering on the NBN Wait List will make sure you’re kept up to date on all the latest happenings in your area, and you can also choose your plan so you’re ready to roll as soon as possible.

Melbourne, do you want to take advantage of internet that is up to four times quicker than the fastest currently available ADSL2+?

You’ll be happy to know that the NBN (National Broadband Network) rollout is progressing across Melbourne which means that the increased speed, reliability and other benefits the network delivers are being made available to more and more homes.

Looking at the NBN map of Melbourne, you’ll see a range of areas with widespread coverage already, others where there are a smaller number of addresses with coverage currently available, and a larger range of suburbs where building has started and the network will be available soon.

As the rollout of the NBN to Melbourne progresses under the plan by NBN Co who are building the network on behalf of the Federal Government, new suburbs and towns are being added frequently. We can keep you up to date with the NBN rollout to Melbourne – just register your interest here and we’ll let you know when it is available at your address.

The rollout of the NBN to Melbourne so far has provided widespread coverage to a few inner suburbs including Carlton, Parkville and Brunswick East as well as small pockets of coverage in the CBD. Looking further out, Tullamarine, Gladstone Park, Mill Park, Keilor Park and South Morang also have large areas with current NBN availability.

Areas where the NBN rollout has commenced

Building or building preparation is underway in a range of other suburbs including Werribee, Yarraville, Kingsville, Tullamarine, Epping, Gladstone Park, Keysborough and Cranbourne. It takes around 12 months for the network to be completed from the time that construction begins, so the NBN will be available to homes in these areas soon.

Is the NBN available at your place?

To find out the availability of the NBN at your place, head over to our NBN Coverage page and enter your address into the coverage tool. This will check the availability of the network at your specific address. If you find that the NBN isn’t available for you to connect to yet, complete our Register Interest form, and we’ll let you know as soon as you’re eligible!

When the NBN is available at your address, we can get you connected – take a look at our NBN plans page to find the perfect plan for you.