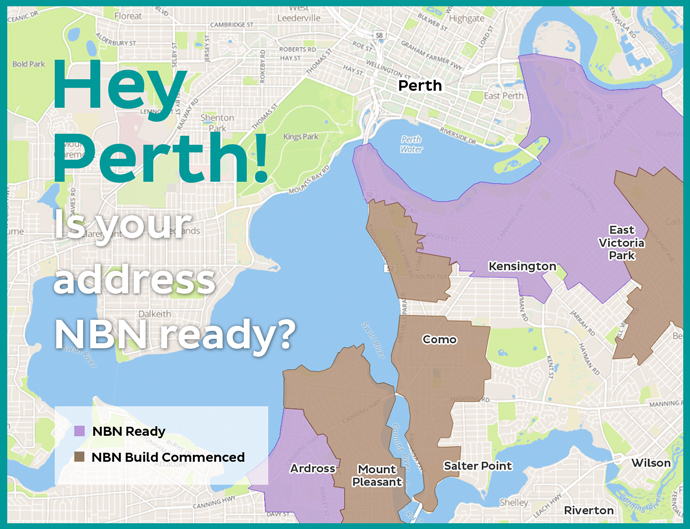 With the continued construction of the National Broadband Network (NBN), high-speed internet will soon go hand in hand with the high temperatures that Perth is known for. Workers have been piecing together an infrastructure that will bring potentially life-changing web capability to thousands of users. With more than a year of work already finished, we wanted to show you just how much progress has been made. To learn more about the technical aspects of the network, check out iiNet’s FAQ page.

As one of Australia’s most populous cities, Perth has had a strong NBN presence from very early on in the NBN construction process. As of August 2014, a large chunk of customers between Victoria Park, East Victoria Park and Kensington already had NBN access. Several other suburbs in the general Perth area were also under various levels of construction and completion.

Nearly a year later and progress continues to roll on. A lot of NBN work has been completed south of the Swan River. NBN site builds that had commenced August 2014 in places around Burswood and Rivervale are now completed, bringing superfast broadband connectivity with them. Despite great existing coverage, there are more sites being planned and built at the intersection of the Graham Farmer Freeway and the Great Eastern Highway.

Just south of there, building has started on NBN sites that will service Lathlain, Carlisle and Welshpool. Continuing that direction, a large swath of land covering Wilson, Bentley, Queens Park, East Cannington, Beckenham and Cannington is being prepared for site construction.

Builds that were being prepared in South Perth are also now under construction. Much of the area bracketed by Mill Point Road, Labouchere Road and South Terrace will soon have NBN power.

There is also construction along the passage of the Swan River that intersects with the Canning River. Manning and Salter Point and the southern portion of Applecross down the coast to Mount Pleasant and Brentwood all the way to Bull Creek all have sites in which building has started.

There are multiple outposts of NBN connectivity above the Swan River. Starting inland in Highgate and heading down to the Swan River, there are a handful of operational sites, including at the nib Stadium and the Western Australian Museum. There is some activity between Subiaco and Wembley, and even further west you can find several neighbourhoods near East Lake that are already rocking the NBN.

To explore the progress of the NBN in your area or around the country, poke around on our NBN Coverage Checker. You can also prepare yourself for the network’s arrival by registering on the NBN Wait List and choosing your plan.

With the rollout of the National Broadband Network (NBN) across Perth, we’re on our way to catching up to other parts of the world with our internet service. As the NBN rollout in Perth progresses, more and more households are getting access to higher internet speeds and increased reliability (you can read more about exactly what that means for you here.)

Looking at the NBN Perth coverage map, you’ll see that some areas are almost fully covered by the NBN, while others have only small pockets of availability. While for other areas the rollout hasn’t started yet – if you’re in one of them, don’t worry, new suburbs are being added to the rollout all the time.  The best way to keep up to date with the rollout and other NBN news is to sign up to the NBN Interest Register.

Currently Victoria Park, East Victoria Park and Kensington have the most widespread coverage. There are also a number of both inner and outer Perth suburbs which have pockets of coverage including South Perth, Ardross, Applecross, Landsdale, Henley Brook, Piara Waters and Hammond Park.

Locations to be connected soon under the NBN Perth rollout

With the continuing rollout of the NBN in Perth, there are a number of areas where building or building preparation has commenced which means they will be connected to the NBN soon. The locations with the largest planned areas of NBN coverage include South Perth, Como, Carlisle, Burswood, Rivervale, Ardross and Applecross.

How can you find out if your home is NBN ready?

The areas we’ve mentioned are the ones which have the largest areas of current or planned coverage; it’s certainly not an exhaustive list of suburbs where the NBN rollout has started though.

The best way to find out if your home is NBN ready is to head on over to our NBN coverage page, enter your address into the handy coverage tool and it will show you the availability of the NBN at your address.

What if the NBN is a while away from my area?

The NBN may be a little further away than you’d like but why not enjoy the benefits of being an iiNet customer today?

If you’d like us to let you know when the NBN will be available at your place – complete our Register Interest form here, and we’ll let you know as soon as you’re eligible!