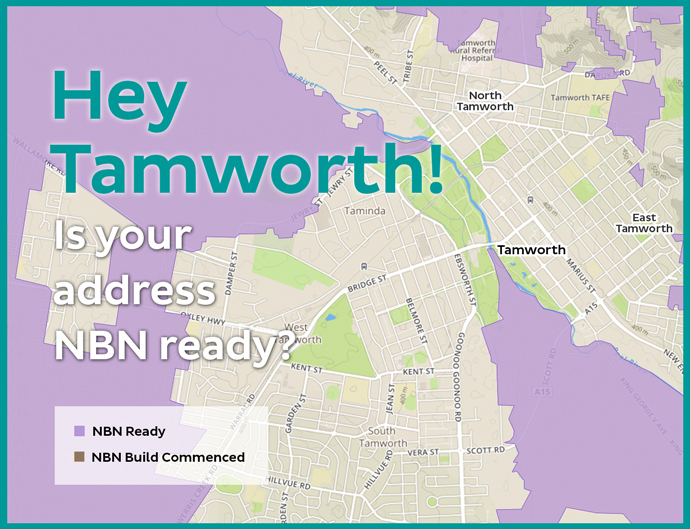 Rome wasn’t built in a day, but it was worth the wait! The same can be said about the National Broadband Network (NBN) that aims to connect all of Australia. The NBN’s quick, reliable service will bring positive change to many facets of life, including business, leisure and education. To learn more about the benefits of the NBN, check out iiNet’s NBN FAQ page.

Tamworth is one of many major cities along the eastern border of New South Wales to be smack bang in the middle of NBN implementation. Some users in the region are already enjoying the fruits of that labour.

In central Tamworth, much of the NBN coverage is situated below the banks of the Peel River. The main swath starts in Bicentennial Park and spreads down between the Oxley Highway and the New England Highway. Further south towards Kingswood and south of Nemingha that capability joins a larger area of NBN coverage.

Calala is the only major break in the previously mentioned area. But users there need not worry. Some neighbourhoods near Illawara Place and Galloway Place already have NBN action. Other building sites are being prepared to the northwest of Melissa Avenue and also east of Whipbird Street. Those in the pocket around Bellbird Street, Falcon Drive, Ibis Street, Magpie Drive and Lampada Park are already NBN-ready.

On the other side of the Peel River, there are small pockets of access moving counter-clockwise toward East Tamworth. Small sections along the western border of the large forested area are already connected, all the way up to the Botanical Gardens. There is also NBN capability north of North Tamworth, above Johnston Street and along Moore Creek Road.

Moving west, north of Oxley Vale, there is already a lot of coverage. It will continue to improve with a site being built near Grand Meadows Drive and others planned around Browns Lane near Windmill Drive.

Most of the area bracketed by West Tamworth, Taminda, Hillvue and South Tamworth does not yet have NBN coverage. But that’s likely to change before too long. New sites are constantly being scouted and planned.

To get a better view of exactly where the NBN is up and running, poke around on our NBN Coverage Checker. You can enter in your address and see if the network is already operating in your area. It will also let you know where other sites have been planned or are being built.

Make sure you’re registered on the NBN Wait List so that you’re kept informed once the network becomes live in your area. Plan ahead by browsing iiNet’s NBN plans so all you’ll need is a few clicks to start enjoying the speed and reliability offered by the NBN.