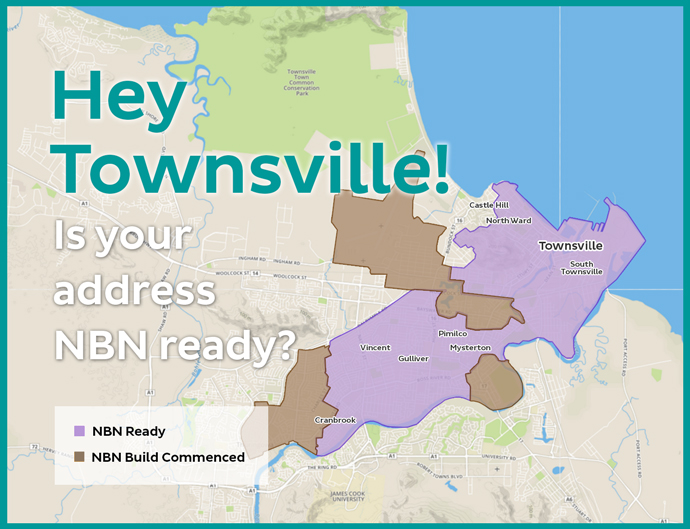 Townsville, the jewel of North Queensland, is home to an array of breathtaking natural attractions. The region features a large portion of the Great Barrier Reef and several beautiful beaches. Those attractions are now joined by the ability for some to access the National Broadband Network (NBN), with more sites being planned and built as you read this!

The NBN is coming to replace the existing copper wiring upon which most internet and phone services run. The system will provide users incredible internet speeds, improving users’ everyday lives on several levels.

The NBN rollout in Townsville

Right now the main thrust of NBN progress is in the highly populated northern area towards the coast of Townsville. A large chunk that snakes south along the Ross River already has access to the NBN. In the north, this expanse stretches west through Railway Estate and South Townsville to West End, North Ward and Castle Hill.

Moving south, continuing to use the Ross River as an eastern border, the NBN is currently available to customers in areas such as Mysterton, Pimlico, Gulliver, Vincent, Aitkenvale and parts of Cranbrook. Sites in Hyde Park and the eastern sections of Currajong and Mundingburra are currently under construction, which will add to the already large swath of NBN coverage.

Progress is continuing to be made further west, with sites in various states of preparation and construction in several areas. Site building planning has commenced in an area that starts in Belgian Gardens and stretches up the coast through Rowes Bay all the way north past Pallarenda. The same is happening in Mount Louisa and Bohle. Building of NBN lines has already commenced in Garbutt and around the Townsville Airport and also in Kirwan and Thuringowa Central.

NBN sites dot other spots in Townsville, too. Construction has started in Saunders Beach and Bluewater. Meanwhile, some customers in the pocket bordered by the Bruce Highway and the Mount Low Parkway are already enjoying the fruits of the NBN. The same can be said of those operating in and to the northwest of Burdell. More coverage areas exist in north Bohle Plains, west Condon, to the southeast of Neil McCarthy Park and to the east of Rossmead Park. The NBN is already humming along around Lavarack Barracks and near Cape Cleveland, too.