Did you know that the earliest confirmed use of a prosthetic device dates all the way back to 950-710 BC? A prosthesis (if you want to use the technical term) is an artificial device that replaces a missing body part that may have been lost through trauma, disease or congenital conditions. In this case, it was an artificial toe made out of wood and leather that was discovered in an Egyptian tomb near ancient Thebes.

Needless to say, prosthetic devices have come a long, LONG way since then! Today, we’re still seeing breakthroughs in the field that give the devices more functionality and better feedback to their users – not to mention a slightly sleeker look than wood and leather.

This month, we’ve taken a look at some of the recent developments in medical science that are advancing the technology of prosthetic devices and giving us an insight into what kinds of devices may be more widely available in the future.

Artificial skin that can feel pain

While not being able to feel pain may sound nice in theory, think about how you’d fare if you couldn’t tell that you’d cut yourself, or if you were too close to an open flame. It may be unpleasant, but pain plays an important part in our safety by immediately alerting us to harm or hazards. The prosthetic limbs on the market today aren’t capable of transmitting feelings such as pain or texture back to the user, which can make it pretty easy to accidentally damage their expensive prosthesis.

In the future, that may not be a problem anymore – scientists at the John Hopkins School of Medicine in the USA have developed an artificial layer of skin that’s capable of transmitting sensations back to the user’s brain via an electric nerve stimulator that’s implanted in their arm. The sensations returned by the pressure sensors in this “e-dermis” aren’t the strongest (one user described the pain as a “3 out of 10”) but that’s still enough to make users aware of pressure and pain while using their prosthetic device, making it much easier to use with confidence! 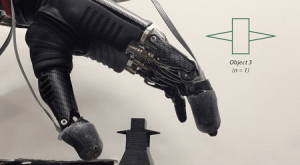 Making prosthetics easier to use

When it comes to prosthetic devices, performing precise movements can be difficult. Prosthetic limbs tend to move more slowly than biological ones and regulating grip strength (or getting a grip at all) can be a challenge. The Life Under Kinetic Evolution arm, or LUKE arm, developed at the DEKA Research and Development Corporation (USA), aims to revolutionise prosthetics with a series of electromyogram (EMG) electrodes that pick up signals from the user’s muscles and translate them into precise movements.

The result? Not only is the LUKE arm strong enough to lift a bag of groceries and versatile enough to allow users to reach behind their backs or over their heads, it’s also dexterous enough to handle delicate objects without breaking them, such as eggs. This greater functionality makes everyday tasks much easier for users so they can go about their lives without having to worry about whether or not their prosthetic will be able to do the job. 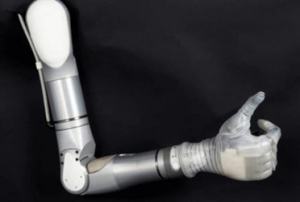 Smarter prosthetic devices need smarter power sources. Since these flash new devices require electrical components to operate, something needs to be giving them power over a long period of time without adding too much weight. Usually batteries with a longer life are larger and heavier, which isn’t practical for everyday life. That’s where scientists like those from Deakin University’s and CSIRO’s Battery Technology Research and Innovation Hub (BatTRI-Hub) come in. They’re working to create safe and reliable batteries for the soft robotic hand prototype developed by the researchers at the University of Wollongong in NSW.

Some of their materials of choice are ionic liquids which, unlike the lithium-ion used for the batteries we have in our phones, aren’t volatile so they’re difficult to ignite, making them much safer. Researchers are looking at packing the ionic liquid batteries within the prosthetic arm itself, but there are a number of challenges they still need to overcome. The liquids need to perform at the same level as a lithium-ion battery, the robotic hand still needs to be flexible, and all of the batteries need to be easily accessible so they can be recharged. It just goes to show that there’s a lot to be considered when it comes to energy storage!

Of course, all of these cutting edge technologies come with a hefty price tag. Even the range of prosthetic devices available today can be difficult for many people to afford. That’s something that companies such as Open Bionics are hoping to change by using 3D printing to significantly reduce the cost of manufacturing for prostheses. You can watch one of their 3D-printed creations in action here.

Not only is it cheaper, but using 3D printing technology to produce prosthetic devices gives creators the ability to tailor a device to fit a user perfectly – not to mention cater to their aesthetic tastes. The e-NABLE prosthetics collection on the NIH 3D Print Exchange has a wide a range of different-looking designs, including some funky gauntlets which could be appealing to children, who can often be overlooked when it comes to the colour and appearances of prosthetics. 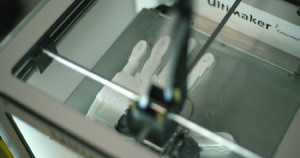 Have you seen any cutting-edge medical tech around that you’re excited about? Tell us about it in the comments.