This year’s PAX Australia has come and gone in Melbourne, and boy was it an amazing show!

Everything from the venue, the panels, the indie game representation and even the weather were even better than last year (which was still fantastic!). If you’re reading this with no clue what PAX is, I’d suggest reading the PAX preview for some context.

Over the course of the 3 day event I attempted to squeeze in as many panels as I could, sometimes forgoing meals out of a foolish desire to see everything. With so many simultaneous panels, seeing everything was literally impossible, but what I did see was entertaining, intelligent and eye-opening.

Highlights included “Playing as a Female Character – does it matter?” which was a very positive and inspiring discussion, the “Good Game: Ask Us Anything” which was as hilarious as expected, and “Videogames… FOR SCIENCE!” which provided a fascinating look into how science and video games are benefitting from one another in unexpected ways. A re-cap of the panels wouldn’t be complete without mentioning the hilarious “Penny Arcade Q&A” in which PAX founders Mike and Jerry answered questions from the audience.

The exhibition hall this year was even more mind-bogglingly jam packed with sights and sounds than last year, yet somehow felt more spacious. The big studios Nintendo and Microsoft both had their spaces (Sony notably absent), with Microsoft deserving special mention for their [email protected] section showcasing indie titles on their systems. Nintendo had hands on previews with the New Nintendo 3DS/XL as well as the upcoming Super Smash Bros for Wii U. Other big studios in attendance were Ubisoft showcasing their upcoming games, Bethesda showing off their new title Battlecry, and 2K had hands on with their highly anticipated game “Evolve”.

My favourite section of the expo hall by far, was the ANZ Indie Pavilion. A fairly large space featuring a couple dozen of the best indie titles Australia has to offer. Why wait in line for 20 minutes to play the next Assassin’s Creed game when you can freely chat to the amazingly talented men and women of Australia’s indie scene? With no hassle at all you could step right up to get hands-on with their games and soak up the positive vibes. There were too many to mention, but some of my favourite indie games included the brutally difficult Titan Souls, the wickedly addictive Hand of Fate and the surprisingly scientific Particulars. Some of the best moments I had at PAX were just talking to these creators about their games, hearing how their studios started and what their inspirations were. 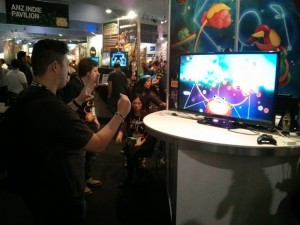 When I needed a little down-time there were a range of options for chilling out and soaking in the atmosphere. The entire promenade outside the convention centre had adopted the PAX spirit with local pubs/restaurants offering discounts to attendees. Inside the expo hall you could chill on a bean-bag in the Handheld Lounge, have a chat in the Diversity Lounge or grab a board game from the PAX game library and spend some time with friends (or make new ones!).

Even with everything I managed to see and do it felt like I barely scratched the surface. I didn’t get a chance to watch or participate in any of the many game tournaments, nor did I attend any of the concerts. So many interesting panels passed me by and there were even too many indie games to truly get in-depth with them all.

My biggest take-away from PAX AUS 2014 was how amazing it was to be part of the community. Sometimes it can be easy to fall into the trap of imagining the gaming community as being composed entirely of its worst elements; the trolls, the harassers and elitists, but the people at PAX show that up for the misrepresentation it truly is. Diversity and inclusiveness were talking points during many of the panels I attended, which always drew energetic applause from the audience. The entire show felt positive, inclusive, friendly and fun. I can’t wait to return next year.