Paying the price of online policing 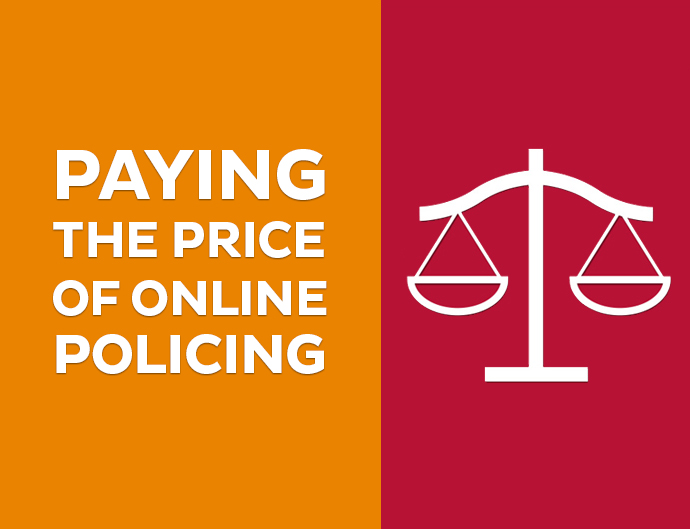 For those following at home, you may remember that the Australian Government recently released an online copyright infringement discussion paper to the public and invited feedback. iiNet has made a submission on this issue, which I’ve summarised below.

As we’ve said many times before, iiNet does not condone copyright infringement. iiNet supports the government’s stated desire for a vibrant creative sector in Australia. In fact, we are a leader in making content available to our customers. For those that like stats: our Freezone videos are attracting 50,000 views per month and our TV subscription service, FetchTV, offers a library of over 3000 movies, with over 20,000 purchased every month plus access to leading TV subscription channels. We are soon to distribute on online copy of the award winning documentary “The Crossing” which we helped to fund. iiNet are also really proud of our gaming community at games.on.net, which also provides access to massive range of gaming content.

As previously mentioned, we’re more interested in addressing the reasons Australians infringe copyright, rather than applying a band aid to a broken leg. The short-term approach described in the government’s discussion paper, fails to offer anything by way of long term solutions to reducing online infringements. Experience in other countries demonstrates that targeting BitTorrent file sharing simply causes infringers to change tactics. Dr Rebecca Giblin’s comprehensive and peer-reviewed research demonstrates that there’s very little to suggest that ISP policing or ‘graduated responses’ help achieve any of copyright’s aims.

We agree with the observation of Spotify’s Kate Vale that “access, availability and price does contribute and is the answer” to reducing infringement.

We’d like to think that those selling content wouldn’t cling to antiquated models that clearly alienate their customers. The music industry, for example, has moved on with many great services such as Spotify and iTunes. Kate Vale has highlighted that, across the world, the average conversion rate from free listeners to paid subscribers of Spotify, is 25 per cent, and Australia sat above that, at 31 per cent.

In the US, the home of legal digital content, unauthorised file-sharing is apparently limited to ‘weirdos’, according to Louis CK. This observation, together with extensive research from the likes of Ericsson, clearly shores up our belief that access is the problem, infringement is merely a symptom.

Highlighting the challenges that Australian consumers face with availability, price and access of online content is not the same as saying infringement is “okay”. What we are suggesting is that if the government and content industry is serious about addressing copyright infringement they need to tackle the causes and not just the symptoms.

We have long seen rights holders ignore the facts in order to generate a good headline. It is disappointing to see their rhetoric repeated by our policy makers. Let’s outline a few of the most egregious claims:

Australians are the world’s worst pirates

No credible explanation of this dubious number has been provided. It is mathematically impossible to prove unless the retail sector, the mining sector, and the telecommunications sector are somehow included in the total. To suggest that online copyright infringement is putting at risk 8% of jobs in Australia is ridiculous and does not correlate with the ABS figures. A report by Access Economics commissioned by AFACT in 2010 estimated the economic contribution of the film and television industry was about 49,000 FTE workers.

It is rarely reported that Game of Thrones was Australia’s most legally downloaded TV show or film in 2013, or that Australia is only second to the US on a per capita basis in digital consumer revenues.

In comments and feedback we’ve received from consumers, we’ve seen some common themes:

As long as some sectors of the content industry continue to treat consumers as the enemy (or criminals even), the government’s proposals are likely to be met with antagonism from the public.

As Malcolm Turnbull has said:

“The greater the restrictions on the availability of content in Australia and the higher the cost relative to the rest of the world, the less public support there will be for whatever action is taken to sanction copyright infringers …”

“the content owners … are the ones who have to justify why they are charging more in Australia, why they are not releasing content in Australia at the same time it is released elsewhere in the world.”

Letting rights holders decide what is fair and reasonable

One proposal in the discussion paper gives rights holders, in practice, the ability to determine what is ‘reasonable’ and what is not, in terms of the steps ISPs should take to prevent our customers from engaging in online infringement. Speaking from experience, this means that they will demand ISPs to take action on their behalf.

How does that impact our customers? Simply put, this change in the law could enable rights holders to demand that ISPs such as iiNet send notices to their customers. If the alleged infringement doesn’t stop, some rights holders want us to slow down our customers’ internet speed. The current legislation still requires ISPs to terminate the accounts of repeat infringers to get the benefit of the ‘safe harbour’, so termination is also clearly on the table.

This proposal puts ISPs and any other intermediary at great risk of being found to have ‘‘authorised’ copyright infringement.. Apart from ISPs, this increased risk will mean that investment in public Wi-Fi networks, Wi-Fi in cafes, schools and transport networks, taxis, libraries and any other online service like cloud or search services, will be too risky for most investors. Investment in these services will be an early casualty of the government’s proposals.

Transferring responsibility for the protection of a party’s own private property rights, onto a third party, is a dangerous precedent with ramifications across the entire economy – not just ISPs, but schools, universities, libraries, WiFi operators (like city councils) cloud services, search engines and many others. In 2012, the High Court agreed iiNet had no obligation to impair or terminate our customer’s Internet access on the request of the rights holders. The rights holders and the government are seeking to overturn the legacy of this landmark decision.

Despite government reassurances to the public that termination of accounts are not being considered, we’re understandably sceptical.

The law on this topic (known as the ‘safe harbour’) still includes a requirement for ISPs to implement a policy for the termination of the accounts of repeat offenders. If they don’t have such or choose not to implement such a policy, ISPs will be exposed to possible financial penalties for ‘authorisation’ of our users’ alleged infringements. Under the proposed changes, that will be a significant risk to take.

We are also very concerned about the possibility of any ‘graduated response’ or ‘notice’ scheme being introduced in Australia. There are a number of reasons:

Rights holders have always maintained that pursuing legal action against individuals is not only a costly exercise, but also results in bad publicity for their brand(s). The government’s proposal is a clear attempt to shift both the cost and brand damage to others (primarily ISPs and their customers).

Law enforcement is a core responsibility of government. Shifting the cost for law enforcement on to private companies means consumers end up paying through higher internet bills.

Because such schemes have failed to deliver – they just don’t work – nobody (not government, not rights holders, not ISPs nor consumers) wants to waste money on it. The government seems to be saying that ISPs (and, therefore, even their non-infringing customers) will just have to suck it up, regardless.

We’ve spoken at length about Data Retention, and it remains relevant to this debate.

If rights holders are to identify those they allege are infringing copyright, they would need ISPs to match IP addresses to customer details. Presently, iiNet has no need to retain the data required for matching. This means a raft of new data retention obligations would accompany any three strikes or ‘notice’ scheme (you know – the one that doesn’t work).

Both the UK and the US rights holders are known to work with third parties (sometimes called ‘copyright trolls’) to use the contact details of customers matched to IP addresses as a means to extort payment.

In the UK, the law firm ACS:Law was pilloried for such tactics, the principal was suspended from legal practice and the business eventually wound up. In the US, this tactic is being claimed as a successful approach to ‘monetising infringements’. Using our courts to order the release of customer details – simply so intimidation and bullying could force customers into making exorbitant payments – to avoid uncertain legal costs is not something I’d like to see imported into Australia.

We suggest that the government should instead consider supporting the relevant stake holders to embrace the “Follow the Money” approach which re-directs significant advertising revenue away from sites which facilitate copyright infringement.

We know that tackling copyright infringement is a complex issue, and we’ll keep fighting for the rights of our customers.