Shake up your screen with these TV shows 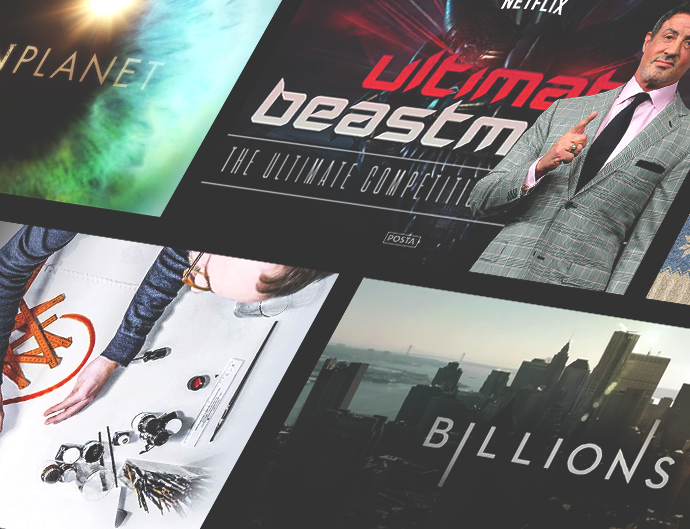 When the iiNet team were preparing for the launch of Netflix down under, there was definitely a lot of excitement in the air… Netflix was finally here! A massive rotating catalogue of TV shows and movies available cheaply over the internet, on demand!

That was a couple of years ago now. Today, we are much more spoiled for choice, whether it’s iTunes music, Spotify, Stan or Netflix… streaming is the new black for movies, TV and music.

Nevertheless, every now and then I’ve found myself suffering from ‘streamers fatigue’. Once I’ve watched all the shows I know I like, it can be difficult to find new and interesting ones in the massive back-catalogues of TV series and original content being delivered by the competing networks.

So you don’t have to do the digging, here are some great discoveries I’ve made recently for you to add to your ‘must watch’ list. A more recent piece of Netflix Original programming; from the promotional artwork, Ultimate Beastmaster looked like some kind of cross between Power Rangers and Transformers. The series is actually a competition reality show in a similar vein to American Ninja Warrior and Wipeout.

Hosted by Terry Crews and Sylvester Stallone, this adrenaline-fest pits competitors from Brazil, Germany, Japan, Mexico South Korea and the United States against one another in a giant multi-stage, knockout obstacle course in the shape of a gigantic beast. Only 1 of the 16 original competitors will be crowned Ultimate Beastmaster at the end of the season.

Its over-the-top reality TV, but the international competition element in particular makes Ultimate Beastmaster stand out from its contemporaries. This comedy series out of the UK stars Dylan Moran as a grumpy, drunken bookshop owner Bernard Black. There are only a handful of things Bernard has time for in life, namely drinking, smoking, despising the outside world and tormenting his hapless assistant Manny Bianco (Bill Bailey). This 18-episode series launched the comedic careers of both Moran and Bailey in the early 00’s and is without a doubt one of the funniest TV series I have ever seen. It’s a shame they didn’t create more than 3 seasons! Abstract: The Art of Design

I’ll admit that being a web designer myself, I’m inherently biased towards anything design related, but I found this Netflix docu-series super creative and really informative. Abstract tells the story of design icons from many different disciplines, whether its graphic design, architecture, photography, or even footwear! Abstract takes a look at the artists in each field and how they became so iconic. This is one for the creative types, or anyone interested in design in general. A good one for the kids (or those ‘big kids’ out there looking for a bit of early 90’s nostalgia) Sonic the Hedgehog is a cartoon series based loosely on the now well-known SEGA video game character. Sonic and his trusty sidekick Tales must stop the evil Dr. Robotnik and his array of robots from taking over the planet Mobius. Will they be successful in their mission? You’ll have to watch to find out! This mini-series has all the great cinematography you’d expect from a good documentary, but with a bit of a twist. Narrated by John Hurt, Human Planet takes the focus away from wildlife and takes a look at people. Humans have adapted to survive in every environment on earth, whether it’s the oceans, deserts, jungles, cities or even the arctic. For those who like nature documentaries, you’ll be hooked on each episode as it covers a different habitat and how humans have managed to survive there. This great TV series brings a ‘cat and mouse’ thrill as you follow the ambitious and morally ambiguous hedge-fund manager Bobby Axelrod as he grows his power, wealth and influence through insider trading and bribery. Hot on his heels is Charles “Chuck” Rhoades, a District attorney with a particular distaste for wealthy criminals. This series was particularly good viewing given today’s post-GFC financial climate and the chase will have you hooked! This true-crime anthology series is based on the Coen brothers film of the same name. The first season follows Lorne Malvo as he passes through Bemidji, Minnesota and influences the small town with his malice, violence and deception. This black comedy can be particularly dark, violent and surreal at times, and it stars some big names like Billy Bob Thornton, Colin Hanks and Martin Freeman. Wonders of the Universe

Everyone’s favourite rockstar-scientist Brian Cox travels to the wonders of the world while explaining a fundamental scientific principle in each episode. This series features great cinematography paired with Brian Cox’s great narration and presentation style, making this a true joy to watch. For the science nerds out there, this is a must see, even if the subject matter is already familiar.

If you‘ve found a hidden gem in the depths of your streaming services, let us know in the comments!