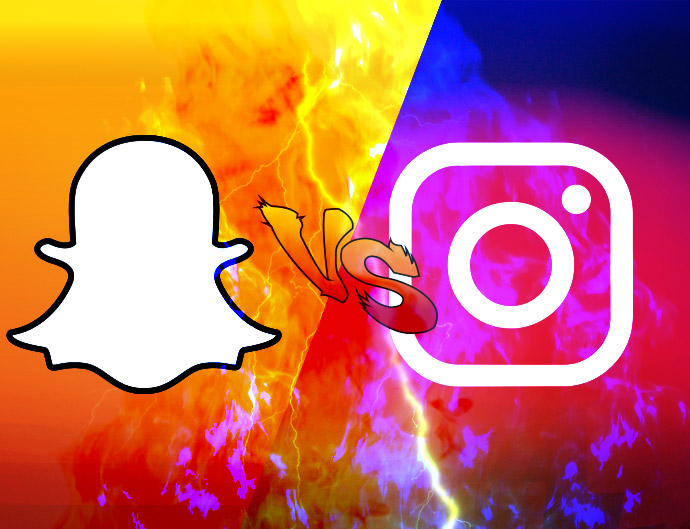 Snapchat and Instagram are two of the biggest apps in the world right now. They serve a similar function of providing a platform to share moments through imagery. Many users love them because they cut through the “noise” of other social media platforms like Facebook and Twitter and focus solely on pictures and videos.

Although they share a similar goal, each app goes about it in different ways. Snapchat photos delete themselves after they’ve been viewed, while Instagram posts stay up on your profile unless you decide to manually delete them. This means people often feel like they can be more “real” on Snapchat than Instagram.

From the early days, one of the features that stood out on Snapchat was “Stories”, which allows you share images and videos for a 24 hour period with your followers. Your followers can view the content as many times as they like during the 24 hour window, but once time’s up, the content is deleted. Unlike receiving random snaps throughout the day or viewing separate pictures on Instagram, Snapchat Stories allow you to document a whole day and truly tell your story though a series of photos and videos that your followers can view back to back.

After seeing the success of Snapchat’s Stories, Instagram revealed their own “Stories” feature, allowing Instagram users to share their own stories for a timed period. The update created a lot of chatter online and even had some accusing Instagram of being a copycat. As similar as the two features are, there’s a few key (but subtle) differences between Snapchat’s and Instagram’s “Stories”. Let’s take a look. In Snapchat Stories, if one user uploads multiple snaps to their story, you can tell when one snap will end and the other begin by a circular timer in the top right hand corner. When it finishes counting down, the snap will switch over. In Instagram Stories, a bar will appear right across the top of the screen with clear markings of where each post ends, which makes it very clear to see how many posts are going to be in one story by the number of notches in the bar.

Snapchat’s circular timer, only the other hand, simply has an inner circle which counts down clockwise to the overall duration of the story while the outer circle is counting down each individual snap. This is visually harder to interpret because it only gives you a vague idea of how many snaps there will be based on how fast the inner circle counts down.

Snapchat Stories also uses a swipe animation to separate one user’s story from the next, but it’s more of a screen wipe and it might not be very obvious unless you’re looking out for it. Instagram’s cube visual takes the win for me as it’s much more noticeable – you can’t miss it. All in One Place

One of the drawbacks of Snapchat is that it isn’t the most intuitive app to use. I know at least for me it took quite a lot of stabbing randomly around the screen to work out most of it, and even now I sometimes take a minute to remember how to do certain things (like adding new contacts to my list). Instagram’s layout is much more intuitive, especially for first time users, and the same rings true of its Stories feature.

On Instagram, you can see your contact’s stories at the top of the page when you sign in, represented by little bubbles with their Instagram profile picture on them. The stories appear on the same page as all of the other posts, keeping everything together in a neat little package. Snapchat Stories are on a separate page that you need to swipe right to get to. It’s not a big deal, but it’s just not as clean an interface as Instagram.

One of the fun things you can do on your stories in both Snapchat and Instagram is draw crazy stuff and write on them! I had a play with both of them and could see some distinct differences in what you could do in each. This is what I found.

Snapchat is better than Instagram when it comes to adding emojis, especially as stickers. While you can put an emoji on your Instagram story post, it’s limited to being part of your single block of text. This means you can’t place words and emojis separately. In Snapchat, you can add emojis within the text as well as separate stickers which you can plaster all over the place. The stickers feature includes some cute custom designs as well as all the usual suspects from the emoji world.

Snapchat also has the selfie filters which are really fun to use. Have you seen a bunch of people on your Facebook with profile pictures of them with dog ears, glowing eyes or flowers floating around their head? They’re screenshots from Snapchat. If you press and hold your face on the screen in Snapchat, it will map your face so it can apply funny filters to it which can distort the shape of your face, add crazy makeup to it, add animal ears, etc.

But Instagram isn’t to be written off in terms of editing: it has a few tricks of its own that can’t be found in Snapchat. First of all, it has a glow pen which adds a bit of pizzazz to your drawn creations. It also has a highlighter pen with a low opacity so you can still see the image underneath. Instagram also lets you choose the thickness of your pens, while Snapchat only has the one default size. Another nice feature of Instagram is that it has a little drop shadow on the font feature, so if you have white font, it won’t be drowned out by a white background, whereas white font disappears on a white background in Snapchat. The best of both worlds

If you want to be sneaky, you can upload Snapchat videos to Instagram and Instagram videos to Snapchat. Say, for example, you want an Instagram story with Snapchat’s dog selfie filter: you film the video in Snapchat, save it to your phone, then upload to Instagram stories (which lets you upload any photos or videos you’ve taken over the last 24 hours). You can then draw on it with all of Instagram’s pens before uploading as part of your story. While you can do this the other way, Snapchat does not appear to let you edit pre-recorded videos. So if you want Instagram’s pretty rainbow filter on your Snapchat story, you can have it, but you won’t be able to add any witty remarks or stickers.

Though Instagram’s Stories has clearly copied Snapchat, it has improved the overall design. That doesn’t mean Snapchat won’t continue to reign supreme in the story sharing space. If Snapchat has shown us anything, it’s that popularity can trump design; the fact that Snapchat is trickier to learn may even be seen as a bonus to its young users, as it keeps their parents off the platform. Teens are willing to take on the learning curve because all of their friends are using it, and so it continues to grow. However, I believe Instagram stories will be used by a wider audience due to its clean interface and ease of use while Snapchat remains the “kid’s choice”.

Which do you prefer: Snapchat or Instagram Stories? Let us know in the comments below.