Site blocking: Does it work? 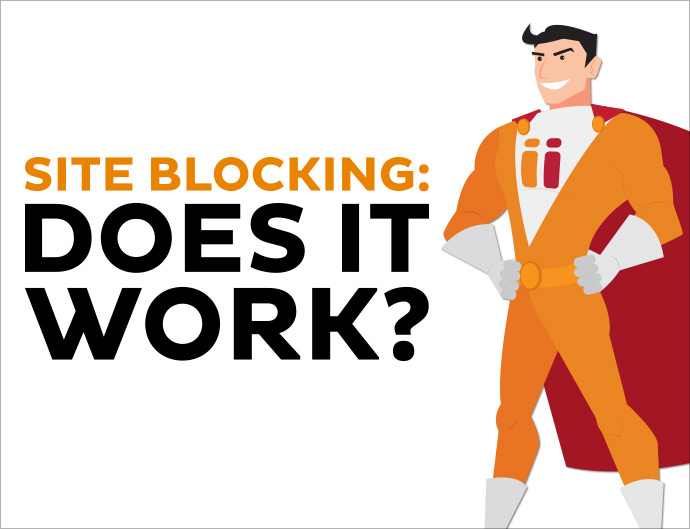 To preface this blog, let me point out, yet again, that we think piracy is wrong.

This blog is not a ‘how to’ session on copyright infringement, we don’t do that. This is more of an attempt to educate people that think in sentences that start with the word ‘just’:

We’re not the only country looking for solutions and we’d have to be a brain-dead zombie to simply lurch along, ignoring the fate of those who went before. Let’s ask our elected representatives to learn from the experience of other jurisdictions and do that by examining the evidence; the actual, verified, empirical evidence of what works and what doesn’t.

Rights holders have been in this tussle for years, the file sharing industry is now global, very sophisticated and totally mainstream. Techniques have evolved, simplified, monetised and diversified, over the last ten to fifteen years, and many options and alternative distribution models have been constructed. The content industry has not kept up.

We know the pointlessness of simply blocking sites like The Pirate Bay, when they can change their address in minutes. The Internet has no gate that we can put a padlock on.

There are many alternative ways for infringers to access their favourite movies and TV shows online.

Instead of addressing the reasons why Australians illegally download movies and TV shows, the government instead seems determined to be seen to be ‘doing something’ to ISPs while defending, at all costs, the business model of the Hollywood movie houses. The clear hint from the Attorney General is that his plan includes government-mandated roadblocks for popular BitTorrent search engines like The Pirate Bay, even though these blocks are easy to overcome.

But Pirate Bay is just one of many BitTorrent search engines on the Internet. We got 2.6 million results when we ran a Google search.

If 2.6 million options are still not enough to find what you’re looking for, there are meta-search engines like TorrentBox and Torrentz, which are designed to compile the results from dozens of BitTorrent search engines. Sure, we can get a minute-by-minute list from the government of all the possible sites, and try and stop the plague of locusts with a can of fly spray, but who’s going to keep the list up to date, who’s going to police it, who’s going to pay?

But the thing is, that the rights holders have nagged incessantly to government “You have to do something!”

Maybe that’s all this is about. Being seen to do something. Anything.

There’s no shortage of BitTorrent search engines but, even if people are wedded to The Pirate Bay, it’s simple to bypass whatever roadblocks the government puts in place. There are countless proxy services online – 35.7 million results from Google – which will let infringers bypass filtering to visit blocked websites. There are sites such as xRoxy and or Proxy.org, which catalogue the countless proxy services. Proxybay.info is dedicated just to tracking the dozens of Pirate Bay proxy services around the world, designed specifically to bypass government-imposed blocks on the popular site.

Using a proxy service is child’s play, literally. School kids already use proxy services to beat school filtering and access Facebook and YouTube in the classroom. Other people use them at their work desk to outfox their IT department.  It may not be right, and we don’t promote it, but let’s take whatever steps we take with our eyes wide open. Let’s not buy into the ‘futility-on-a-stick’ that Hollywood is peddling in Canberra.

There’s even an “Unblock The Pirate Bay” extension for browsers like Chrome. Just like BitTorrent search engines, new proxy servers appear faster than they can be blocked (remember the 35.7 million result we got?) – catching them all is like trying to hold back the tide with a broom.

The next step up, from a proxy server, is a Virtual Private Network to mask either legal or illegal activities. A VPN creates an encrypted tunnel across the Internet, popping out somewhere else in the world. This shielded ‘tunnel’ lets Internet users ensure their privacy and mask their activities from anyone, including law enforcement, their ISP and any government filters. Many business people use a VPN to create a secure connection back to the office, but they could just as easily use it to connect to a foreign VPN service and pop up in a country where The Pirate Bay isn’t blocked.

VPN services are, once again, child’s play to use, just by installing the software and clicking a button to mask location and hide activities from prying eyes.

The only way the government could stop this traffic would be to block all encrypted traffic, a Herculean task that even the most determined dictatorships struggle to enforce. Anonymity tools, such as the TOR network (68.7 million hits), might still come to the rescue – it’s often used by political activists, but the impact of VPN blocking, on legitimate business users should certainly dissuade the Australian government from thinking about prohibiting or blocking encrypted traffic and VPN sessions.

It’s pretty clear that there’s no foolproof way to stop anyone visiting BitTorrent search engines, like The Pirate Bay. Once the torrent file pointing to the movie they want has been downloaded, Internet users don’t need to stay connected to the BitTorrent search engine. They simply load the tiny torrent file into their BitTorrent software of choice (38 million hits on Google). This perfectly legal software then scours the Internet looking for other people sharing that movie. There’s no central hosting point for the government to block, BitTorrent works by everyone sharing snippets of the file directly with each other.

There are other anonymous BitTorrent proxy services and software that lets users encrypt their BitTorrent traffic, to disguise it so the ISP can’t block or throttle it. Really serious downloaders run their BitTorrent software in the cloud rather than on their computer (another 6.6 million results).

There’s no possible way the government can block all the ways Australians can access The Pirate Bay and BitTorrent, and truth be told, BitTorrent is only the tip of the file-sharing iceberg.

Apart from peer-to-peer networks, which the government is focusing on its “copyright crackdown”, there is a wealth of file-sharing sites where a wide array of media files can be found. Once again, they keep popping up faster than they can take them down. If Internet users still can’t find what they’re looking for, there’s always the vast Usenet newsgroup archives.

By now you’re starting to get a feel for exactly how futile it would be for the government to block access to sites like The Pirate Bay, in an effort to curb piracy.

Many people prefer to do the right thing, and they want good service at a reasonable price. They want to pay for the very desirable content. That’s why many Australians are prepared to sneak into US services like Netflix and hand over their money, even though they might find it all for free elsewhere. The government lumps these people in the same group as BitTorrent users. They want to stop Australians from bypassing geo-blocking, an artificial restraint on trade. Trade covered, ironically, by something called a ‘Free Trade Agreement’.

A proxy server, Virtual Private Network or browser plugin like Hola makes it easy for Australians to sidestep geo-blocking and access US-only services like Netflix, Hulu and Amazon Prime. Some even accept Australian credit cards, while others let you pay via workarounds such as PayPal or a prepaid Visa or iTunes card.

Another alternative for bypassing geo-blocking is for customers to use a DNS-based service such as Getflix or Unblock US. Just changing the DNS settings on your broadband router makes it easy to watch Netflix in Australia on computers, smartphones, tablets and game consoles, as well as some Smart TVs, Blu-ray players, and Google’s Chromecast.

Easier still, Australians can bluff their way into the US iTunes store, where content is cheaper than in Australia and available sooner. There’s no geo-blocking so it’s simple to switch an Apple TV between the Australian and US iTunes stores, plus they will find Netflix and Hulu already installed and waiting.

Once again, it’s all but impossible to police all the ways Australians access foreign content. Yet the government seems determined to pursue a simplistic and futile content blocking strategy rather than actually addressing the reasons why Australians look elsewhere for their entertainment.

Years of ranting against piracy – while ignoring customer feedback – have got rights holders nowhere. Rather than declaring war on frustrated customers, perhaps we should declare war on the problems which have driven Australians to take their business elsewhere.

And to the content control freaks, we say – start treating your customers as customers, not the enemy, and you might find things improve.

It works for us.