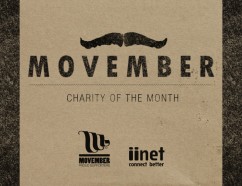 Staff ‘stache up for Movember

The ‘stache through the ages has taken on many forms and meanings. From the scraggly to the well-maintained, from the humble rocker through to the modern gentleman, a moustache is a way of life…a symbol of what it means to … Continue reading →

Comments Off on Staff ‘stache up for Movember

by Annabel Slade iiNet would like to announce its sponsorship of the Miss Universe WA contest for 2011-2012. As big supporters of events within our home state, especially those that are devoted to charity, iiNet and Miss Universe WA are … Continue reading →

Comments Off on iiNet sponsors Miss Universe WA for 2012

by Christopher James In an iiNet first, our staff will be unearthing their pocket change for a charity that’s important to our Manila counterparts – Hospicio de San Jose. Since iiNet’s purchase of AAPT’s consumer division and adoption of the company’s … Continue reading →

Comments Off on Charity efforts unite for Manila

by Nikkita Dixon iiNet staff have been donating more than just pocket change to our Charity of the Month for June – Australian Red Cross – they’ve also been giving the gift of life. Last month we recruited new members for iiNet’s blood … Continue reading →

iiNet has a ball with Lifeline

By Anthony Fisk As many of us do, someone close to me suffers from depression. A few years ago she went though a period of real crisis, but was fortunate to have a strong support network to get her through. … Continue reading →