The secret language of Emoji 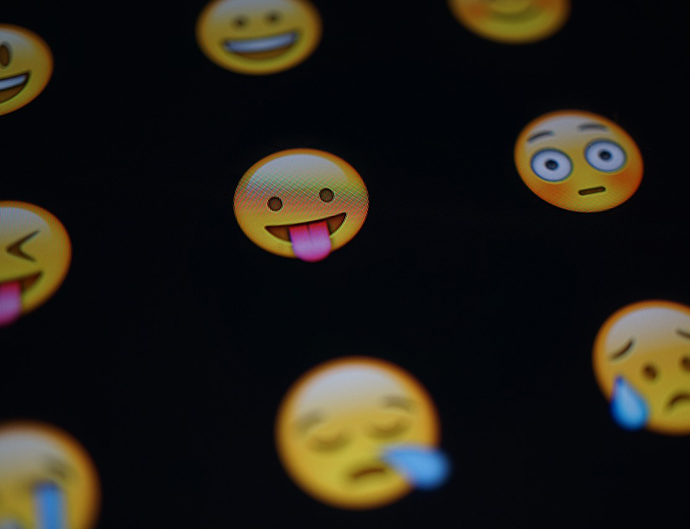 It’s rare to see a status, tweet, text or post without an emoji these days. These adorable Japanese icons allow us to inject extra emotion and humour into our electronic communications and, by replacing words with emoji, even save time.

That hasn’t stopped nearly every country and culture adopting these funny little images to enhance their online conversational skills. But how did these golden round faces work their way into everyday life, and how are they being used? It’s time to delve into the secret language of emoji.

This is where everything seemed to start. Through our mighty human intellect we learned during the dawn of computer technology that when you typed a colon symbol next to a bracket symbol on the computer, it looked like a crude smiling face. These humanoid text-symbols became known as “emoticons” (which, admit it, you first read as “emotion”).

Emoticons became a great way to convey tone and emotion to our otherwise sterile, black-and-white text. As anyone who’s sent an email knows, it’s far too easy to miscommunicate without the added human features of tone and expression, and emoticons helped clarify the meaning behind messages with pictorial representations (though I still like Arj Barker’s suggestion of fixing the issue with new fonts like “Good Times Roman”).

With the popularity of these symbols growing, the idea arose to turn emoticons into real images, as opposed to just text that resembles an image. So in 1999, Japanese designer Shigataka Kurita invented prototype emoji for the first mobile internet platform: i-mode. This is when the emoji was born.

I think a lot of us born in late-80s to early-90s were first introduced to emoji on chat platform MSN Messenger. When we typed in that familiar emoticon “:)” into the chat window, bam! Up popped this little legend:

Huh! That’s pretty neat. I wonder if there are more… That’s the moment a lot of us got hooked. Suddenly we are using the “angel” face to feign our innocence, flirting with the “kiss”, “heart”, and “rose”, using the “puppy” face when we’re trying to be cute and get our way and sending one of the “hugging” emoji when we need comforting, in hopes that our friend on the other side of the screen would send back the adjacent one.

This was just my introduction though, and it’s not just Gen Y & Z hooked on emoji. Once emoji came about, every smartphone SMS system, online instant messaging service and almost all platforms that facilitated digital communication jumped on the bandwagon and got their own unique set of emoji pictures.

So sooner or later people of all ages were getting in on the craze. These days half the Facebook comments I get from my Mum are just emoji. Though she’s started sending “stickers” more recently, which is a whole other ball game I won’t get into right now.

Regardless of where you first started using emoji, over time you probably became used to sprinkling these little symbols throughout your digital messages. Though arguably the most recognisable family in the emoji world appears on iPhones.

Before you ask why you should know emoji etiquette, let me remind you of the great power these pictures yield. Emoji have become so big and so popular, that one of them (the “Face with tears of joy”) won the Oxford Dictionaries Word of The Year 2015, as the “word” that “best reflected the ethos, mood and preoccupations of 2015”. Emoji are even thought to be playing a part in the demise of previously popular Internet slang, like the once great “Lol”. It sounds crazy but emoji have even started to be used as evidence in criminal charges. Don’t underestimate their influence!

So when you can’t beat them, you join them. And here are some examples of how to use emoji like a pro.

Sometimes Gen Y and Gen Z kids take for granted how lucky they were to be introduced to technology at a young age and don’t appreciate that for people who weren’t raised on Tamagotchis, PCs and mobile phones, things might not be so obvious. So we must be forgiving in those cringe-worthy moments when your Grandma sends her condolences for a recent disappointment you had and ends the SMS with “LOL” – she just thought it meant “Lots of Love”!

So I’m here to help you avoid future conundrums like this by explaining that not all of the faces that have water droplets are “crying with sadness”. Here are the real meanings of some of the water droplet faces. That’s not a crying face with closed eyes: that blue blob that looks like a tear is actually supposed to be a snot bubble! Now, I’ve never seen anyone blowing bubbles of nasal mucus in their sleep (and I’m quite grateful for that), but it seems to be a running joke in Japanese media, where it is even seen as kind of cute. Use this emoji to show that you’re feeling sleepy. With that sad little expression and water droplet, it’s easy to mistake this one for crying. Actually, the droplet in this face is a sweat droplet of relief. The sad-looking expression signifies disappointment rather than sadness. After you’ve been through a stressful situation and you have that “phew!” moment when it’s over, this is the emoji to go with. Or just use it when you’re stressed.

So what is the best face to use when you do want to signify crying? I’d use either: This tear emoji, or my preferred: Loudly crying emoji. I like this one best because when I’m crying I like to be as dramatic as possible. Not the epic high-five between bros you may have thought it to be, these hands are actually folded together in the Japanese gesture for “Please” or “Thank you”. And that’s exactly how I use it. When I am pleading “please” with someone or gratefully “thanking” them.

This emoji is called the “hugging emoji”, and I suppose the hands are supposed to be reaching out for a hug. The best way to use this emoji, is to never use this emoji. You’ll just creep people out. Those hands look way too human compared to its big balloony yellow head. Shudder.

This article will end up a mile long if I go through every emoji in the whole emoji-verse, but hopefully these rules will set you up to avoid any emoji etiquette mishaps.

Do you have a favourite emoji? Or have you ever discovered you’ve been using an emoji wrong? Let us know in the comments below.