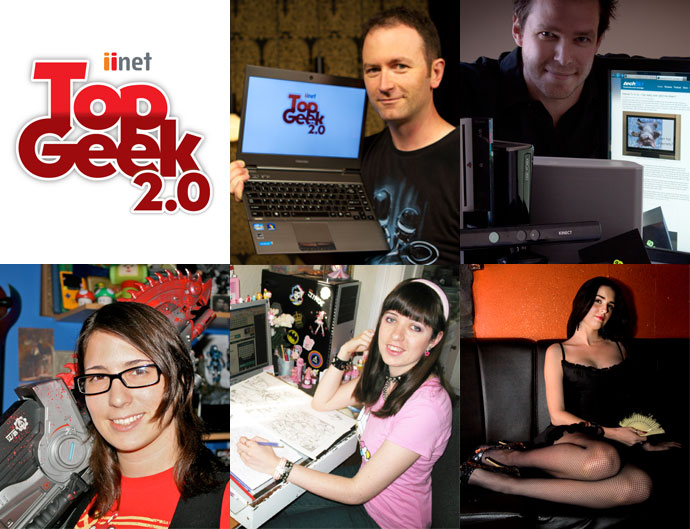 Unless you’ve been living under a rock this past week, you’ll have heard our TopGeek 2.0 competition is back and better than ever. This year we’re calling on geeks from all walks of life to show off their passions in everything from film to fashion, sci-fi to social media, games to gadgets and everything else in between.

With such a wide range of talents coming out of the woodwork, we’ve had to bring on board some of the most knowledgeable people in these areas to judge the TopGeek competition. Having weeded out the cream of the geeky crop in the original TopGeek in 2011, it seemed obvious to enlist in the help of some of our TopGeek veterans. So without further ado, here are the first five of our TopGeek 2.0 judges who will form part of our 15-strong judging panel:

Art judge – Cassandra James
Cassandra James was named Australia’s first TopGeek in 2011. Our Tasmanian-based comic artist got her start in the professional world of illustration by pencilling interior art for the Nylon Angel RPG rulebooks. Since then Cass has spent her time illustrating for books, sketch cards and comic books; working for various companies including 5finity Productions, Bad Axe Studios and Sadlittles; and collaborating with some of her favourite DC authors including Gail Simone (Wonder Woman) and Sterling Gates (Green Lantern).

Internet judge – Andy Wells
One of our TopGeek finalists from 2011, Andy can be heard on more than 50 radio stations across Australia (and one in Phuket) every day on Tech Daily – a radio segment  covering everything in consumer tech and video games. Andy also runs the Tech Daily online publication with daily tech news.

Tech judge – Jason Cartwright
As the founder of TechAU – one the most popular independent technology sites in the country  – it’s no surprise Jason Cartwright landed himself in the finals for the TopGeek competition in 2011. Jason lives and breathes technology and has been travelling the world as a  tech writer and podcaster for more than five years. When he’s not interviewing developers and CEOs, Jason is working hard on a brand new start-up called Constructiv which aims to change the way products are developed.

Fandom judge – Nikita Kashner
Nikita (Kitta) Kashner is proud geek, gamer, blogger and photographer from Perth. She entered the original iiNet TopGeek competition in 2011 and made it into the finals for various geeky talents. Kitta’s been blogging since 1999 and her blog Kitta.net has been nominated for various awards in the past. She was also featured as one of Wired’s Sexiest Geeks in 2007 and 2008. Kitta is real life proof that there are plenty of girls on the Internet and they play video games too.

Game judge – Jess Watson
Jess is a hard core gamer whose love for all things geek and passion for games saw her through to last year’s TopGeek finals. She’s a games news writer and reviewer for Espirino and has over 250 games in her collection, ranging from the Atari 2600 to her beloved Xbox 360s. Jess also works in the health sector, using her tech skills and background in psychology to create interactive training programs and manages her organisation’s online and IT services.

Tune in to the iiNet Blog for an announcement next week on our next round of judges.