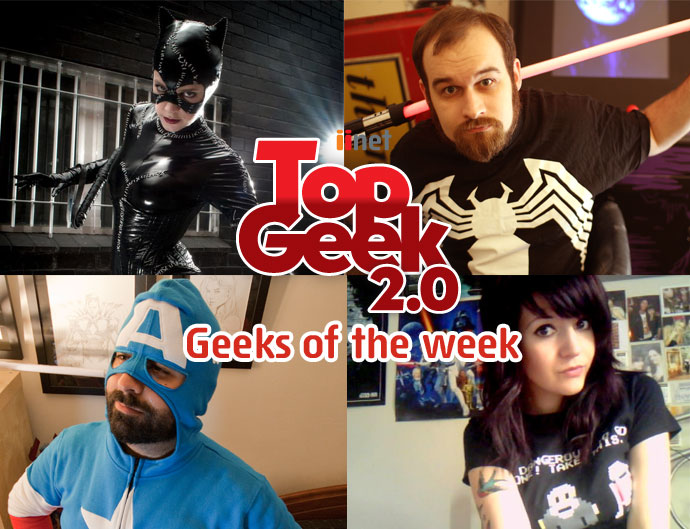 There’s just one week left until entries close for TopGeek 2.0 and our pool of geeks just keeps growing. With so much geeky talent emerging from every nook and cranny of Australia, let’s take a look at some of our favourite Fandom geeks.

Skaidris Gunsmith
Skaidris Gunsmith builds arcades; collects comics, toys and games; he writes about geek culture for a number of blogs and magazines; and interviews some of the biggest geeks in the world for his podcast TheRevengeOfTheNerd.com. Skaidris likes to think of himself as a ‘geek activist’ on a mission to drag every closet Star Trek fan out into the open to discuss the logistics of mating with some of the more creative alien races. This will be the second time Skaidris vies for the TopGeek crown having made it to the final two in 2011.

Lucy Valentine
Since seeing Star Wars: Episode IV – A New Hope at the cinema when she was seven years old, Lucy’s life has changed. Now when she’s not building Lego Death Stars, reading Star Wars: Shadows of the Empire, watching the original trilogy on a weekly basis, collecting original memorabilia, arguing about how George Lucas couldn’t possibly have not known what a parsec was, playing Star Wars: The Old Republic, or forgetting about a little thing called “The Phantom Menace“, she’s probably making obnoxious Star Wars references that no one else finds funny. Lucy also has a rather large tattoo on her back dedicated to the “best trilogy of all time”. Her parting message is this: “don’t ever let anyone tell you Star Trek is better”.

Cem Selamet
Cem is a jack of many geeky trades, but his heart goes out to comic book culture. He grew up watching 1990s animated series of Batman, Spider-man, and X-Men which gave him his first real taste of superpower awesomeness. He says he’s still waiting for that telekinesis to kick in at puberty. He’s got sketches and original artwork from some of his favourite comic artists as well as props, weapons and masks from various sci-fi films. Cem’s favourite writers are Neil Gaiman, Alan Moore, Warren Ellis, Grant Morrison and Garth Ennis. He says if he could write a comic he’d make these guys become the characters in a team called ‘The Walking Lawsuit’ where they’d fight unimaginative writing and have superpowers reflective of their personality and writing style. He also has hordes of action figures at his disposal. Cem only made it through to the Top 20 in TopGeek 2011, but says if he was to win TopGeek this year he’ll be at San Diego Comic Con dressed as Deadpool in a skimpy, green mankini.

Lauren Halstead
Our favourite cosplay geek is heavily into 80s sci-fi fantasy films like The Labyrinth, The Princess Bride and Legend. Lauren describes the first convention she ever went to as the best day of her life. She loves attending and creating events so fellow geeks can interact and enjoy each other’s company. Sewing and expressing the things she loves through costume is a huge passion of Lauren’s.  Her latest project is learning to make and paint armour. For anyone reading this, you’ll find her zombie escape plan on the back of her toilet door to memorise.

If you’d like to show off your inner geek and put yourself in the running to become iiNet’s TopGeek 2.0 and winner of an all expenses paid trip overseas, enter now at the TopGeek website.