Where to install your NBN boxes 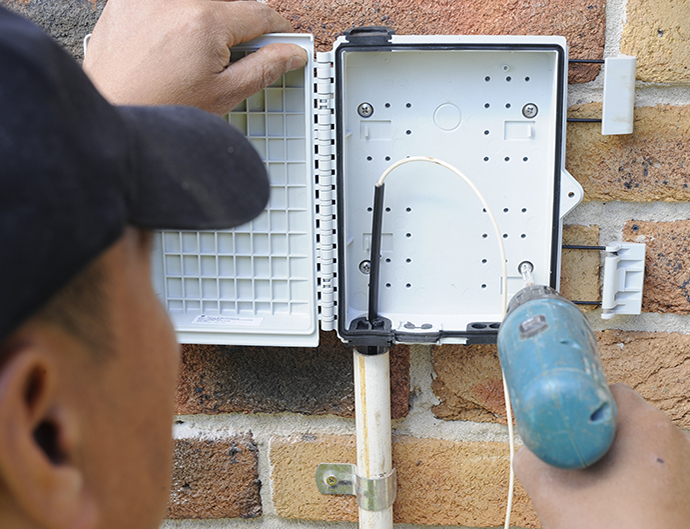 So you’ve been eagerly awaiting your turn to get connected to the superfast NBN network. You’re well prepared, and have done all the things that you can while you wait for it to arrive, including:

But have you considered where you’ll install your NBN utility box and connection box?

What are the utility box and connection box?

Where should the NBN utility box get installed?

The utility box must be installed on the same building as your electrical main meter box or distribution board. It needs to be at least 410mm off the ground, as well as 250mm from water taps and downpipes as well as electricity, gas and water meter enclosures. Allow 1.5m side clearance from gas cylinders.

It’s important the NBN utility box is placed in a location where it will be easy to access: not too high off the ground and somewhere free of obstructions or safety hazards. It’s worth considering any future renovation plans to avoid placing the box on a wall you may want to knock down later.

Where should the connection box get installed?

Just like the utility box, there are some restrictions on where the connection box can be installed. When deciding the location, ensure the lights will be easy to see and audible alarms will be easily heard.

It is wise to avoid installing the connection box in any of the following locations:

Some of the recommended locations for installation include:

What does the installation process involve?

The installer will drill a small hole in the wall to run a cable from the utility box to the connection box. Someone needs to be home for this step.

The standard NBN installation involves installing the utility and connection boxes as close as is practical to the existing telecommunications equipment inside and outside your home. If your existing phone connection runs from the street via an underground conduit, then the NBN installer will use the same conduit. If the existing lead-in conduit is unusable for any reason then NBNTM will look into other options to connect the fibre from the street to your premises. They’ll do their best to find a solution without cost to you, but if civil works are required it remains the responsibility of the homeowner.

Keep in mind that the standard installation does not include additional home network wiring. You need to plug your existing telephones and networking gear into the connection box, just as your modem and telephones were previously plugged into a wall socket. If you want to run Ethernet cables from the connection box throughout your home you’ll need to pay for this yourself.

Typically the inside connection box is installed on the same wall as the outside utility box, which could be in the house or the garage.

Not many people realise that if you’re not happy with where the installer wants to place the inside box you can ask for it to be placed elsewhere, as long as it’s still on an external wall and it doesn’t require more than 40 metres of cabling. This could involve some negotiating with the installer.

If your requirements aren’t as straight-forward you can opt for a non-standard NBN installation, although you’ll likely be charged a fee for the extra work.