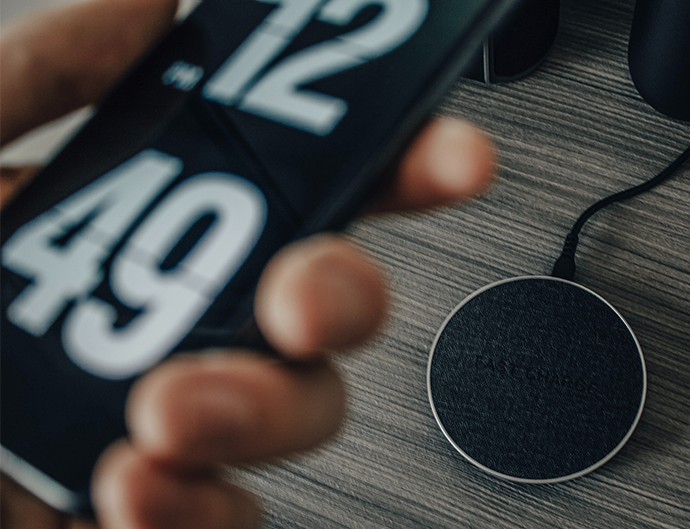 Charging your tech devices is an everyday part of life, just like brushing your teeth or doing the dishes. Many of us have developed habits when it comes to charging our phone, tablet or smart watch, and forgetting to plug it into the charger at the end of the day can seriously stuff up the routine. Some may have resorted to carrying around a portable power bank just in case, but what if charging your device was as easy as setting it down in the right place and picking it up again when you’re ready to go? That’s right – wireless charging.

Read on to find out everything you need to know about the new, easier way to charge.

The technical name is Inductive Charging

If the word “inductive” rings a bell, you may be thinking of an induction stove, where you put a saucepan or pot onto a ceramic heat plate instead of over a gas flame. The electricity powering the heat plate transfers through the ceramic and into the metal of the pan, heating it up so you can get cooking.

The process of wireless charging is actually very similar: you just pop your smartphone, smartwatch, tablet or other device on top of a wireless charger, usually in the form of a disc or a small mat, and wait for electrical energy to transfer from the charging pad into you device’s battery without ever needing to plug in a cable. But don’t worry – nobody’s device is getting cooked! The amount of heat generated by a wireless charger is far, far less than a cooking stove. You may notice your phone is warm to the touch after wirelessly charging, but it shouldn’t be any warmer than it would be through general use, such as making a phone call.

So how does it work?

Naturally, wireless charging doesn’t just happen all by itself, and not all devices are capable of charging wirelessly. Both the wireless charger and the device being charged must contain an induction coil, which is basically just a very flat, broad coil of wire around a small magnet. When an electric current passes through the coiled wire, it creates an electromagnetic field around the magnet, allowing it to transfer a charge to nearby objects like a battery. 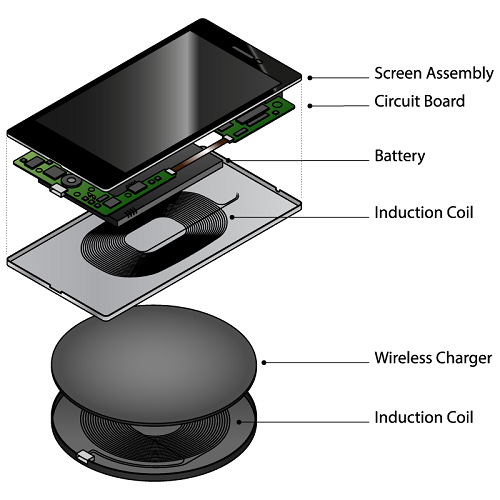 It may surprise you that the concept of wireless charging, or transferring energy between two objects via electromagnetic field, has been around for over a hundred years, originally discovered by Nikola Tesla. However, it took a long time for scientists to figure out how to get wireless charging to transfer energy efficiently enough to be useful. Today, it’s possible to produce electronics that are small enough, and affordable enough, to be used in everyday applications. But devices also need to be able to determine when to stop and start charging – that’s where standards come in.

Getting the right standard

As with most things in the world of technology, there are different standards, or types, of wireless charging that have been developed. These standards operate slightly differently to each other, so they offer different performance and compatibility. A standard also determines how each devices communicates with each other, so wireless chargers aren’t just putting out power 24/7. When a wireless charger comes into contact with a wireless-chargeable device that uses the same standard, they’re able to “talk” to each other and verify that it’s a valid charging session, and then charging starts. This communication also determines when to stop charging because the battery is fully charged.

How to find out if your device can charge wirelessly

So, how do you find out which devices support wireless charging (and check their standard)? When you’re in the market for a new device, the fact that it can charge wirelessly will probably be a featured selling point. For existing devices, you may need to do a little bit of digging. There’s a great guide for devices with wireless charging on Finder but if you can’t find your device there, you’ll need to look up the tech specs on the manufacturer’s website or even just run a Google search for “Can the [device name] charge wirelessly?”.

If your phone, tablet or smart watch isn’t capable of charging wirelessly all by itself, don’t lose hope! You may be able to buy a special wireless charging case or receiver card that you can use to enable wireless charging on your device.

Would you prefer to charge wirelessly, or stick to the old way of using a cable? Tell us in the comments.